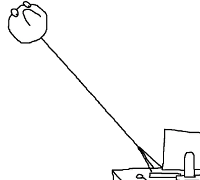 Signed last week by Tennessee Governor Bill Haslam, the new law makes it a crime to post images that can be deemed offensive online. Under the rule, the court would determine if a violator “should have known” that posting an image online would be offensive to someone, and thus, would hold said violator accountable, and could charge said violator with up to $2,500 in fines and nearly a year spent in prison.

The ban is an update to an existing Tennessee law, which makes it a crime to directly communicate with someone — including phone calls and sending emails — in a way that the initiator “reasonably should know” would “cause emotional distress.” The difference between the older law and this update is that posting an image online is viewable to anyone with Internet access, whereas a phone call would generally only go to one direct person. Yes, that means anyone on the entire Internet can be a potential victim. While the law does state that the picture must be posted with “malicious intent,” the fairly unconstitutional bit is that the “malicious intent” qualifier seems to be able to be bypassed if, as mentioned before, the initiator should’ve reasonably known the image would’ve caused emotional distress.

UCLA Professor of Law Eugene Volokh outlines why he feels the new addition is extremely unconstitutional:

1. If you’re posting a picture of someone in an embarrassing situation — not at all limited to, say, sexually themed pictures or illegally taken pictures — you’re likely a criminal unless the prosecutor, judge, or jury concludes that you had a “legitimate purpose.”

2. Likewise, if you post an image intended to distress some religious, political, ethnic, racial, etc. group, you too can be sent to jail if governments decisionmaker thinks your purpose wasn’t “legitimate.” Nothing in the law requires that the picture be of the “victim,” only that it be distressing to the “victim.”

3. The same is true even if you didn’t intend to distress those people, but reasonably should have known that the material — say, pictures of Mohammed, or blasphemous jokes about Jesus Christ, or harsh cartoon insults of some political group — would “cause emotional distress to a similarly situated person of reasonable sensibilities.”

4. And of course the same would apply if a newspaper or TV station posts embarrassing pictures or blasphemous images on its site.

One step closer to trolling being outlawed.