Telepathy Successfully Demonstrated in Humans for the First Time Ever, Using The Force No Longer Necessary

You know this though, right? Didn't you sense our newsletter? 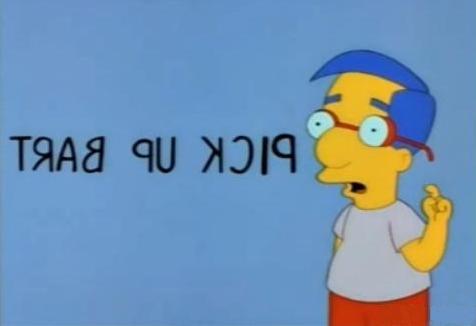 Attention aspiring Psi Corps members and Planeteers: According to a study published August 19th in PLOS One, two research subjects 5,000 miles apart have telepathically communicated the words ‘hola’ and ‘ciao’ to each other in the first successful demonstration of human brain-to-brain communication ever. And robots only helped a little!

For the study Conscious Brain-to-Brain Communication in Humans Using Non-Invasive Technology, two participants, one in India and one in France, were able to communicate via a computer-mediated, brain-to-brain message (hyperinteraction, if you want to sound really cool) from 5,000 miles apart. Study coauthor and Professor of Neurology at Harvard Alvaro Pascual-Leone explains that the researchers

were able to directly and noninvasively transmit a thought from one person to another, without them having to speak or write […] This in itself is a remarkable step in human communication, but being able to do so across a distance of thousands of miles is a critically important proof-of-principle for the development of brain-to-brain communications. We believe these experiments represent an important first step in exploring the feasibility of complementing or bypassing traditional language-based or motor-based communication.

In order to successfully complete the experiment, the researchers used internet-linked electroencephalogram (EEG) and robot-assisted image-guided transcranial magnetic stimulation (TMS. Yep.), as well as four human participants. For the transmission, one participant was placed in charge of the brain-computer interface (BCI) branch where the messages began, while the rest were charged with receiving at the computer-brain interface (CBI). 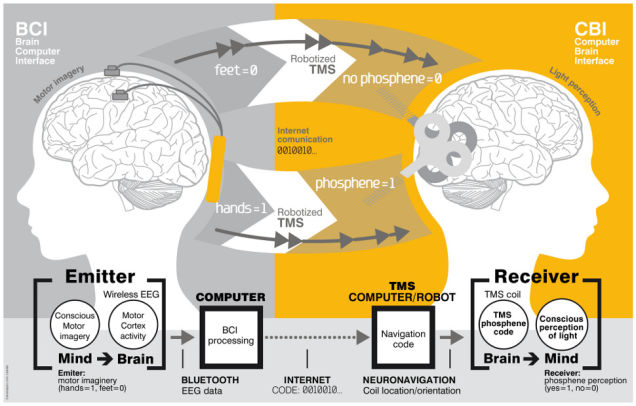 The researchers then used EEG to translate “hola” and “ciao” into binary, at which point the CBI sent the message to participants using noninvasive brain stimulation. (According to the study, researchers took special care to block tactile, visual or auditory sensory cues from interfering.) A second experiment later conducted on participants in Spain and France had a total error rate of 15%.

The Internet has already had such a profound impact on human communication, it’s hard to imagine how this instant mental messenger might change our species if the technology ever becomes more practical or widely used. As the study points out, if and when hyperinteraction becomes more mainstream, important ethical issues will have to be considered. If nothing else, our skills at ignoring each other are going to need to be next-level.