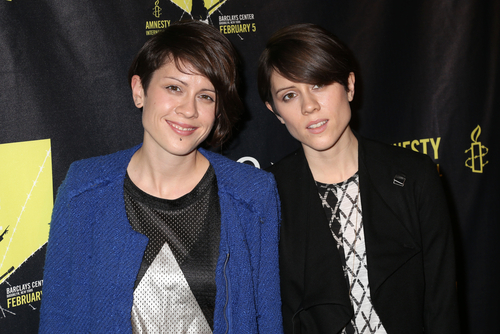 Tegan and Sara have never been shy about standing up for the LGBTQIA community. However, on their most recent tour for their album, Love You to Death, the musical duo set in motion what would become an effort to take their activism game to the next level.

Tegan and Sara have announced the start of The Tegan and Sara Foundation which, according to their website, “works for economic justice, health, and representation for LGBTQ girls and women.” They hope to partner with already-existing LGBTQIA advocacy organizations in order to raise funds and awareness to fight inequality.

As reported by Jezebel, the sisters used their most recent music tour as an opportunity to embark on a “listening and learning” tour, meeting with local fans, activists, researchers, legislators, and nonprofits that focus on LGBTQIA issues. In doing this, they learned that “the lack of federal funding for LGBTQ services, limited training for doctors about the needs of their LGBTQ patients, and severe workplace discrimination are disproportionately affecting women,” among other things. This research then helped them lay the groundwork for what would become their foundation, which they see as an extension of their work.

In a joint statement, Tegan and Sara expressed their ultimate goals:

Through the Tegan and Sara Foundation, we can be proactive with our support rather than wait to react to discrimination as it occurs. We will support the work of other organizations who have been fighting for LGBTQ and women’s rights by raising funds and awareness for their initiatives. We will fight against the repressive legislation of the incoming Trump administration. We will fight against regressive homophobic, transphobic, and misogynistic legislation. We will fight for economic, racial and gender justice. We started the Foundation to dismantle the systems of inequity that prevent LGBTQ girls and women from reaching their full potential. Together, we can make a difference.

This is a truly admirable step for these two to have taken, and it’s wonderful that they’re allowing themselves to be guided by the whole community and the expertise of organizations already in place to help these communities. If you’re looking to up your charitable giving this year in an attempt to mitigate the effects of the coming administration, this might not be a bad place to start.