Teen Girl’s “Sexy Gandalf” Costume Explodes the Internet…But Should It?

I am having some serious mixed feelings regarding a teenage girl’s decision to dress up as “Sexy Gandalf.” Maybe you can help me out.

Eighteen-year-old Melbourne high-school student, Tjitske Van Vark, decided to dress up as “Sexy Gandalf” for her school’s “Muck Up Day,” a day when the school’s seniors pull pranks and wear costumes. She posted the pics to her Tumblr, and they were reblogged out the ying-yang. As Van Vark told Buzzfeed, ““Within three days my follower count had more than tripled, I’ve received far too many wonderful messages.”

I’m glad that she’s had a primarily good experience with this. It seems like she had some fun, and is enjoying her new Tumblr followers. Yet, there’s a part of me that wishes this weren’t the idea for a costume that she came up with.

I’m all for looking sexy, and for choosing a sexy costume. What bothers me is “sexy versions” of costumes or characters that already exist in “non-sexy” versions. There are already plenty of sexy costume options if sexy is your thang and you wanna show skin – Playboy Bunny, Emma Frost, Bayonetta  – but not only is making a “sexy” version of a costume not particularly creative, it also prioritizes a very specific version of “sexy.” I mean, Sexy Hermione Granger? First of all, Hermione grew into sexiness on her own via her brilliance and her increasing confidence, which is why Ron fell in love with her. You don’t need to put her in a tight shirt and a really (too) short Gryffindor skirt to make her sexy. Secondly, if the only way you want to dress up as a character is if you can “sexify” them – maybe you don’t actually want to wear that costume? Just a thought.

Then there’s the disproportionate expectation that women should buy “sexy” costumes and be “sexy” on Halloween. Of course, there are definitely “sexy” guy costumes too, but as you’ve been going out to Halloween parties, or as you continue to attend them for the rest of this month, who do you think are the ones who feel pressure to be “sexy” for Halloween?  Take a look around. 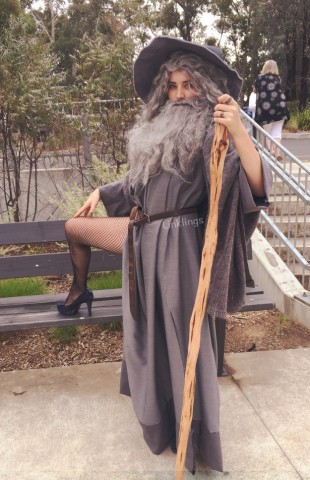 PRO – Van Vark is subverting gender roles by adding a feminine element to a male hero.
CON – She thought the costume was humorous – and what exactly is funny about a male person in fishnets in heels? Are men in drag, or trans women, or genderqueer folks still the butt of jokes? Do we still have to rely on the same ol’ tropes for yuks? And why don’t we laugh at anyone wearing pants?

PRO – Van Vark is asserting her sexuality.
CON – When she says things like ““The absolute best thing though has just been the general thirst for Gandalf I’ve created. Honestly, nothing is better than seeing people exclaim ‘I want to fuck Gandalf’ because of me!”, it’s clear that she really hasn’t given thought to the fact that it’s not Gandalf they’re thirsting for. The reason why people “want to fuck Gandalf” is because they see a girl showing leg in a photo. A gender-bent Gandalf would’ve been cool on its own. “Sexy” gender-bent Gandalf takes away from that.

Again, I’m not here to slut-shame her. Looking sexy is not the problem. The problems for me arise when one tries to “sexify” things while adhering to a very specific, narrow standard, and that standard is applied disproportionately to women. I mean, it would’ve been awesome if she would’ve just dressed like Gandalf and worn a sign calling herself Sexy Gandalf. That, I would’ve thought was awesome. After all, what’s sexier than magical prowess? It also would’ve been hilarious. The fishnets and the heels just make the costume like every other “sexy” costume out there, lacking creativity. It would be really great if we could stop “sexifying” costumes in this way, and instead let people decide on their own what they find sexy or not.

What do you think? Do you love this costume? Find it problematic? How do you reconcile a desire to be and appear sexy with your feminist leanings? Inquiring minds want to know!