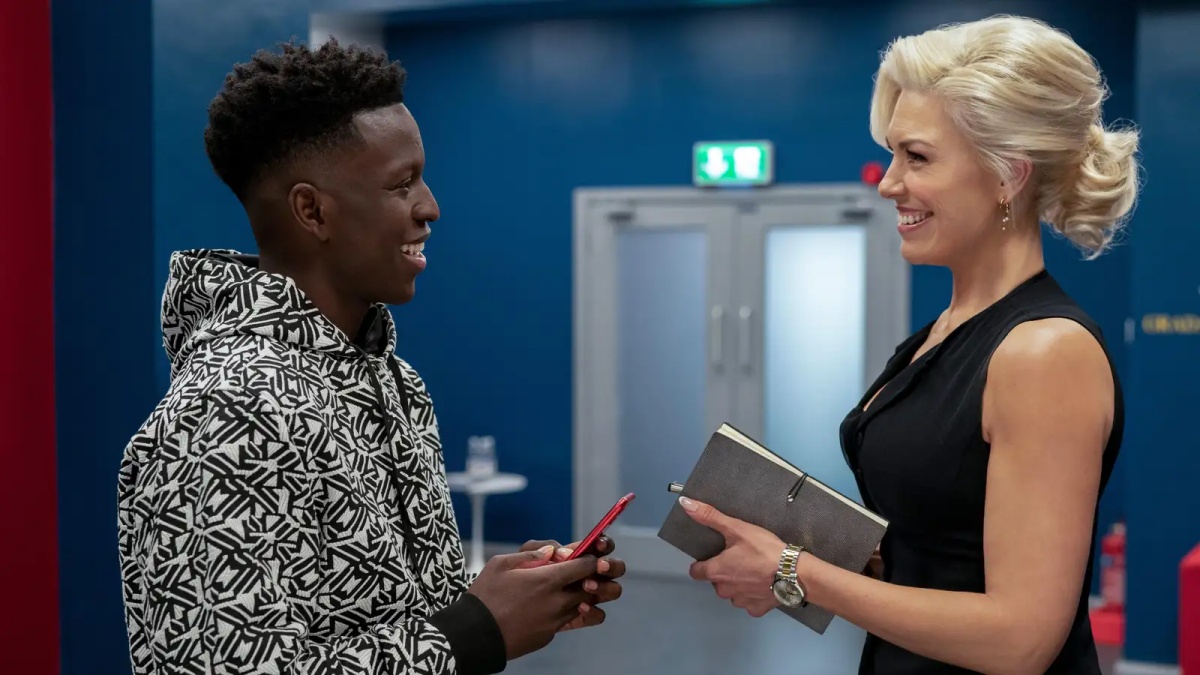 Toheeb Jimoh and Hannah Waddingham have been amazing on Ted Lasso as Sam and Rebecca. While both have had minor things to do this season, following the issue with Dubai Air, their main storyline has been the fact that they are on the romance train. Well, that train has reached the station.

When it was revealed that Sam and Rebecca have been romantically messaging each other on banter, I had the dual reactions of “awww” and “wait, oh no.” Their relationship has multiple layers of problematic, but the most damning is that Rebecca is Sam’s boss, and that power dynamic can only lead to problems for them both in the long run.

The reaction Rebecca has after the revelation that her long-time flirt mate is Sam is for the audience. Rebecca is not a “pedophile” or a “groomer,” as she calls herself—not in the least—and it is clear that Sam is interested (How could he not be?), but Sam is 21 years old. Of course, he is interested in the icy blonde, gorgeous older woman with the voice of an angel. But that is why Rebecca needs to be, in a sense, the adult in the room.

This feels very much like Rebecca is having her How Stella Got Her Groove Back moment post-divorce, after a marriage that we know shattered her self-esteem. I get all of it from a character perspective, but it feels like we are going to see these two characters realize this isn’t going to work sooner rather than later, and it does make me a little sad—especially since we haven’t seen Rebecca do much besides this romantic revival this season.

Toheeb Jimoh told Vulture that he didn’t know that his love interest was Rebecca at first, and he “geeked out” about it with Waddingham after it was revealed.

“I think a lot about that scene we had in the first season where Sam goes into Rebecca’s office and speaks to her and tries to get her to come down to partake in the curse thing, where everybody is burning something to get rid of the curse they have on the team,” Jimoh said. “I think they just immediately had a kinship. There is immediately a connection there. There is immediately a chemistry there, and they just have a bit of a soul-bond friendship thing with each other. And at the end of the day, I think they just make each other feel very comfortable, even though Sam is a bit fidgety and weird with her because she’s his boss. And he always remembers that.”

At the basis of their friendship, there’s a connection there that just everything else doesn’t really matter. This is just somebody who makes me feel comfortable, who is nice to you, and who you like. And of course, she’s incredibly attractive as well. Yeah, I think he would like her, but at this point you just kind of go, Oh, there’s no way that would happen. And so you leave that, and you’re more than happy to have a friendship with this person. But then once this opportunity presents itself, I feel like Sam is at a place in his life where he can just be open enough to go, You know what? The logistics don’t matter. This is somebody who I feel comfortable with, somebody who makes me happy, and somebody who I want to make happy. And I think I can do that.

Time will tell if that will all come together as we move forward this season.