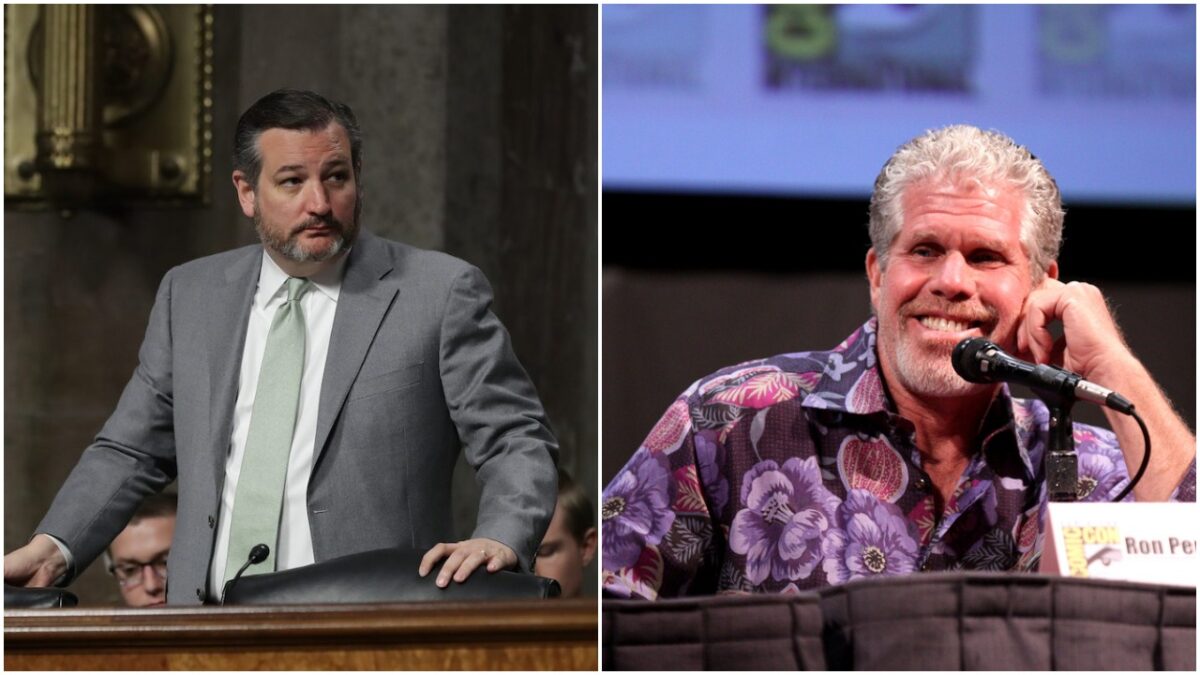 We’re dealing with an unprecedented news cycle full of real issues and incredible change. So of course grown men, one of whom is a sitting US Senator, are bickering on Twitter about who could win in a fight? Sure. Why not. Throw in some murder hornets and we’ll be at peak 2020.

As you may remember from the ancient era of …. oh, last Saturday, legendary Hellboy actor Ron Perlman got into it a bit with sentient sawdust pile, and US Congressman, Matt Gaetz. It was incredibly fun to watch Perlman and the rest of Twitter completely destroy Gaetz for being both a racist jerk and a terrible person who doesn’t know how acting works. But they weren’t done.

Try again? Dude, you brought a Holocaust denier to the State Of The Union. Doesn’t get sicker than that. Buzz off punk, it’s past your bedtime. https://t.co/mFRiR9I2jw

PS: You’re lucky for this guy Matt. If it weren’t for him you’d be the ugliest politician walking. @mattgaetz pic.twitter.com/uUgUDKHgZA

Now, yes, it’s very silly for anyone to make fun of Matt Gaetz’ looks, especially when there are so many more other things to ridicule him for. But Perlman calling Gaetz and Congressman Jim Jordan ugly? Well, that’s too far! And this all just kept getting weirder as Gaetz bowed out and called in the big guns … Uh, Ted Cruz?

Listen Hellboy. You talk good game when you’ve got Hollywood makeup & stuntmen. But I’ll bet $10k—to the nonpolitical charity of your choice—that you couldn’t last 5 min in the wrestling ring w/ @Jim_Jordan w/o getting pinned. You up for it? Or does your publicist say too risky? https://t.co/eRerYVe5kj

Yes, Texas Senator and totally not the Zodiac killer Cruz wanted Perlman to pick on someone his own size. Not him. obviously, that would be suicide. No, he wants Ron Perlman to wrestle Jim Jordan. That’s the guy Perlman called ugly and the same Jim Jordan who has been accused of ignoring and covering up sexual abuse while he was a wrestling coach at Ohio State University.

First off, can’t you just hear every word of these tweet’s in Perlman’s voice? I know I can!

Wait, is this THEE Ted Cruz? Holy shit man! Is this the same guy let little Donnie call his wife A dog and his father an assassin and now kisses his ass? Yo, can I get your autograph man? https://t.co/6QDwCaEkpv

But also, don’t bring Jim Jordan and his awfulness to a Hellboy fight.

I tell you what teddy boy, since mentioning jim jordan and wrestling is… problematic, why don’t we say fuck him and just make it you & me. I’ll give 50k to Black Lives Matter and you can keep all the tax payer money you were thinking of spending. https://t.co/6QDwCaEkpv

Cruz, terrified I assume, resorted to the oldest and dumbest insults: calling Rob Perlman weak and girly. Perlman seemed up for taking that bait though?

I get it, you’re rich. But, apparently, soft. You sure seem scared to wrestle Jordan (whom you keep insulting).

Can’t take the heat? Need to get a manicure? https://t.co/giLnJjZNKr

Let’s get back to bidness ted. jim jordan’s too easy, just a little bitch. But you teddy, you talk shit about New York every chance you get. My hometown. It’s personal. Let’s go mofo!

Men are ridiculous and exhausting.

Says the eunuch who kisses the ass of the lethally incompetent bigot who called his wife ugly and his father a murderer in defense of the drunk driver who wore a gas mask on the house floor to mock the pandemic that has killed over 110,000 citizens and the sexual assault enabler. https://t.co/RqS0cjC9OB

You know what, Ron? You’re being very disrespectful. @tedcruz is a dedicated public servant and you owe him the favor of wrestling his friend while he watches. Just bros rolling around while another bro watches. Why are you being such a square? Let Ted watch you wrestle. https://t.co/Q512y5ldtD

Now, Cruz has yet to accept the offer to physically fight another man to defend the Twitter honor of two other talking jars of mayonnaise parading around as congressmen. And Jim Jordan has not himself weighed in on his bud Ted offering him up as a blood sacrifice to the gods of toxic masculinity, but hey, there’s another actor whose most iconic comic book role saw him shirtless and covered in makeup who would be happy to kick Jim Jordan’s ass…

So, tune in tomorrow when I’m sure we’ll have the details of how and when various intimidating comic book movie actors will be pounding uninformed members of Congress and. I hope Mark Ruffalo threatens to slap Mitch McConnell! Anything is plausible at this point!