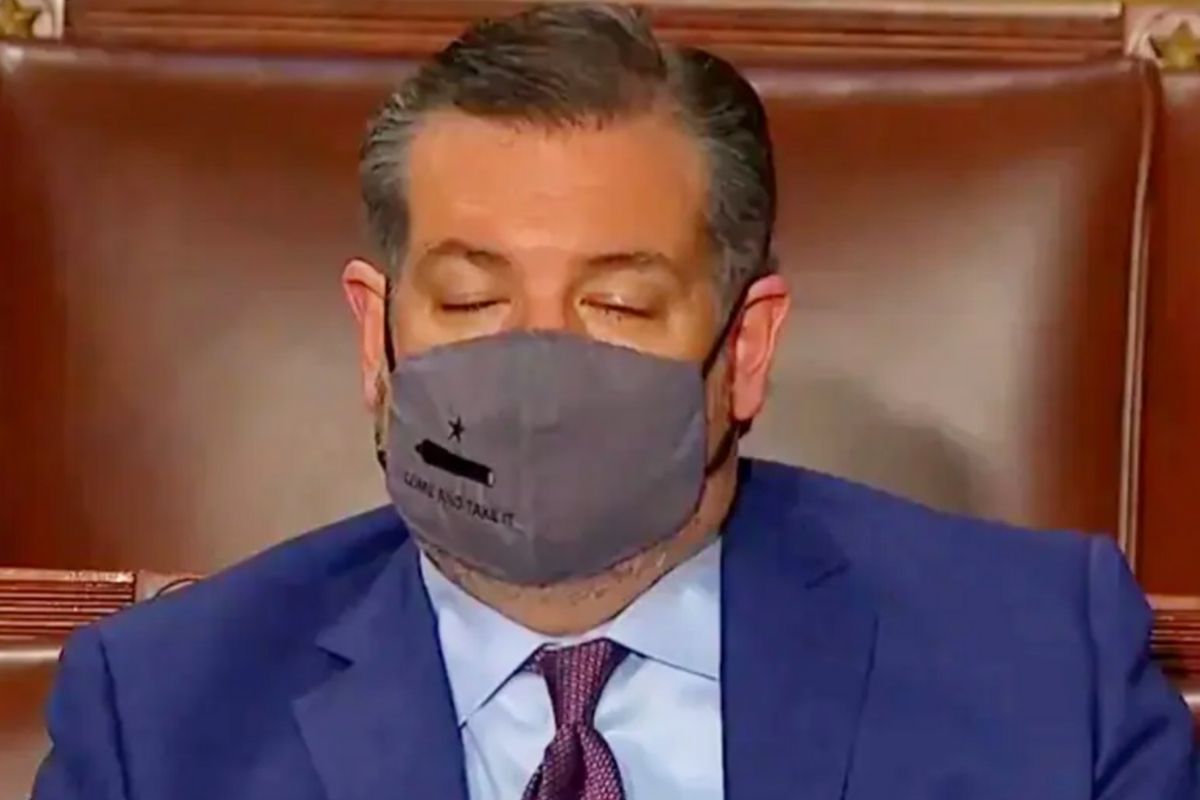 Ted Cruz is a liar. I’ve known that fact for a while. But there’s something about him “falling asleep” during the Presidential address by Joe Biden that really grates my nerves. Because this wasn’t just a happy accident after a long day at work. Based on his comments to Fox News afterward, it seems like this was a calculated choice that Cruz made to bring attention to himself for political theater instead of the reforms that Biden was there to talk about in his 100 days in office. And it’s sickening.

Cruz isn’t here to be an ally to his state or his constituents. He’s here to cause a continuing divide between the Democrats and the Republicans. And the way he decided to do that this time around was by pretending to fall asleep during Biden’s speech to set up his later comments about Biden’s “calm and dulcet tones.” Would you prefer if an orange were at the podium, yelling sexist, racist, and ignorant nonsense?

Is that what you’re telling me, #SnoozeCruz?

And another thing, he challenged Fox viewers to remember what Biden had said during this speech. It didn’t take Cruz too long to then go on to quote Biden about his proposed policy changes. So what is the truth, Ted Cruz? Either you were put to sleep by Biden’s “dulcet tones” and couldn’t remember anything from the speech or you were paying enough attention to quote Biden and go after his proposed changes?

Because from where I’m standing, you’re just proving, once again, that you are a con artist and a liar who has no problem spinning a narrative that benefits you and you alone. And it’s infuriating that your buddies over at Fox News are ok with it. If the roles were reversed and a Democratic Senator did what Cruz did during a speech by the disgraced Trump, they would destroy him.

Seriously, if any Democratic Senator pretended to fall asleep on the great Orange, they would be dragged through the coals by Fox News. They would be called out as “not a true American” and an “utter disgrace to the American people” they serve. But considering this is Fox News, they wouldn’t do the same for one of their Republican allies. The hypocrisy is real.

And since the only justice that we’re going to see when it comes to Ted Cruz and his calculated tomfoolery is online, here are our favorite responses and tweets from the #SnoozeCruz tag that drag this liar for all he’s worth.

Looks like Ted’s eyes are hooked up to his state’s power grid pic.twitter.com/vC7LUSJ4nJ

Dreaming of the sun and beaches of Cancun 🌴. pic.twitter.com/W2JnQT2vfm

#SnoozeCruz faked falling asleep in an attempt to make a statement and disrespect Biden but he truly made himself look like even more of an ass wipe. https://t.co/t5r9Lj92i6

I remember when Senators actually made policies and debated on facts and did something for Americans. #SnoozeCruz is a troll who only wants attention and is so lazy criticizing everything is all he can manage. https://t.co/2BUPDPQiEj

What hair product does #SnoozeCruz use to keep his hair looking so shiny and greasy? https://t.co/yUguSkACrz