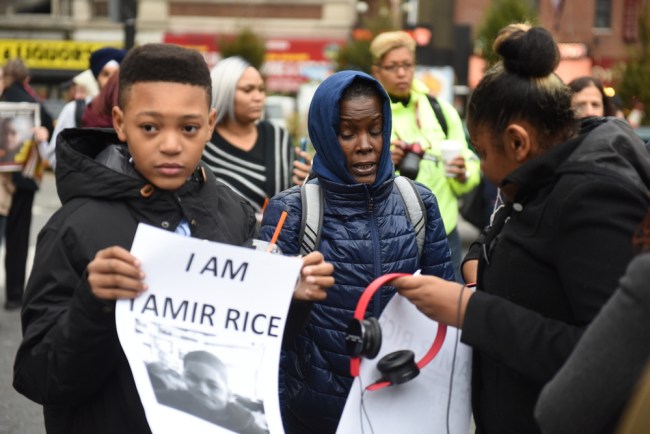 Good news! The cop who shot and killed 12-year-old Tamir Rice back in 2015 has finally been fired! Yay! The bad news? He was fired over “administrative charges” against him, and that subsequent investigation. Because apparently, administrative issues gets you totally fired, but killing a 12-year-old doesn’t.

As reported by Uproxx, after a Cleveland grand jury cleared Officer Timothy Loehmann of any wrongdoing in relation to the killing of Tamir Rice, “the City of Cleveland filed several administrative charges against him, Officer Frank Garmback, and others involved in the matter. [Today’s] news comes as a result of the investigation into these charges, which accused Loehmann of violating department rules when he applied to join the force.”

Those administrative charges apparently have to do with him lying about his employment history when he joined the police force. He’s being fired, not for killing a 12-year-old boy … but for lying on his freaking resume.

What’s weird is that Loehmann’s partner, Officer Frank Garmback, is being reprimanded for reasons more directly related to Rice’s death. According to CNN, Garmback “will be suspended for 10 days because he violated tactical rules relating to how he drove to the scene that day.”

Okay … so Loehmann is being fired for “administrative” reasons, and Garmback is being suspended for … driving wrong. The Cleveland police department is basically REFUSING to say Hey, you shot an innocent kid, and that’s fucked up, so you’re fired and can’t be a police officer anymore. Instead, they prefer to try and make it about anything else.

So yeah. Great. Loehmann is fired and Garmback is being reprimanded. Awesome. I only wish it was for the thing they did that was actually horrible, and not for these BS reasons. Of course, that would involve a police department admitting that their officers regularly kill innocent black children.

And I guess you can’t have that, can you.