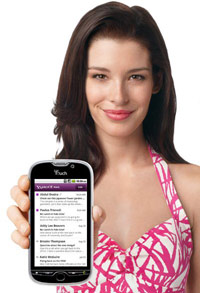 Though cellphones generally display the name of the caller, they tend to do so only if the calling number is in the phone’s address book, if not, then only the number is displayed and we all wonder if we’re about to pick up the phone with an ex or telemarketer inviting us to a taste test on the other end. Now, if one happens to have T-Mobile as their carrier, a new caller ID service is available for an extra $4 per month.

Using technology based on Cequint, the service, called “Name ID,” displays a caller’s name, phone number, and the city from which they are calling. Oddly, none of the four major US carriers have had caller ID — a service that has been available on landlines for quite some time now — available on their mobile service, and it is a little surprising that it took so long to come to mobile phones, but hey, better late than never.