Syria Drops Off the Face of the Internet, Both Sides Blame the Other 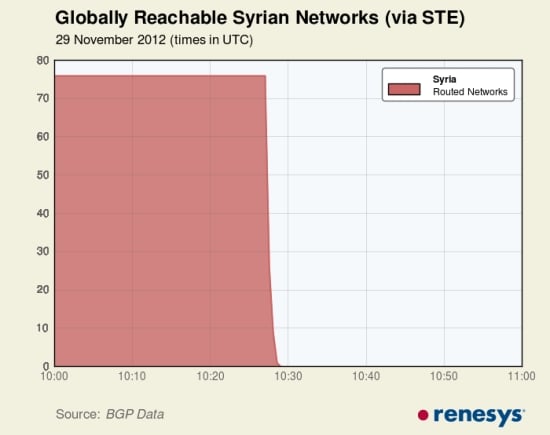 The conflict in Syria between rebels and government troops is nothing new. The country’s been engaged in a bloody civil war for over a year now, and there are no signs of it getting better at any point soon. In fact, it’s just gotten worse. As of 12:26PM Damascus time, Syria’s essentially been cut off from the Internet. Like any good modern conflict, there’s no clear cause and both sides are blaming each other.

Network security firm Renesys said, “In the global routing table, all 84 of Syria’s IP address blocks have become unreachable, effectively removing the country from the Internet.” This isn’t the first time Syria’s had Internet troubles. There was a short blip back on November 25th and, while Renesys skirts away from saying this was a trial of some kind of Internet kill switch, it’s easy to imagine that the government was giving their new abilities a test.

There is still some evidence of connectivity from the country, but all these connections are assumed to be offshore and therefore not subject to whatever it is that happened to the rest of Syria. Considering how long it’s been, something serious has obviously gone down.

The Internet’s death coincides with increased activity near the Damascus airport, so it’s easy to blame either side. Considering the fact that it’s unlikely that rebels would want to cut an important means of communication, and the government would happily stifle it, it’s hard to say that the rebels would have anything to do with intentionally causing a blackout. That’s doesn’t exclude them from unintentionally causing one, though.

This graph from Akamai, another company that monitors Internet traffic, shows a similar drop in Syrian access: 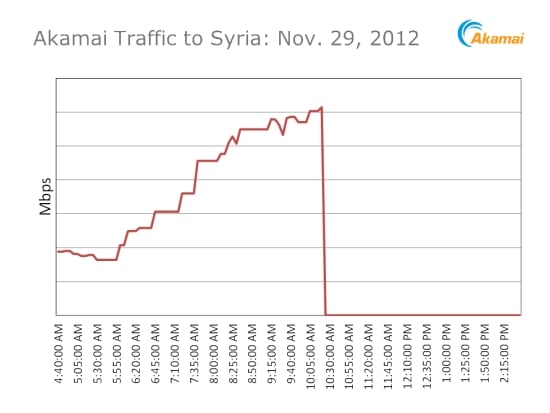 The Internet has basically all dried up in Syria.