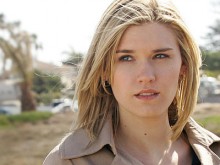 Syfy television show Haven, starring everyone’s favorite voice actress who collected Nathan Drake’s tears in a jar because she loves him, Emily Rose, will be integrating Twitter into the show and using it as a main plot device starting in the episode airing this Friday. The episode will feature two of Haven’s characters joining Twitter in a contest to see who can gain the most followers. As anyone who watches the show won’t be surprised to discover based on the description of the contest, the two characters joining Twitter are Vince and Dave, the town of Haven’s resident wise, bickering journalist, possibly paranormally skilled brothers.

The integration goes further than two fictional characters having Twitter accounts on the real-life service, as “strange” tweets will appear, which will supposedly help drive the plot for the next seven episodes of the series. Fans of the show will be able to follow the tweets at @VinceHaven and @DaveHaven, with fans watching on the East Coast able to follow the tweets in real time on Twitter as they get tweeted out on the show.

Senior Vice President at Syfy Digital Craig Engler claims this promotion marks the first time Twitter has been integrated into the actual storyline of a television series — something that sounds a little too public relations, but I personally cannot think of another television series off the top of my head that made Twitter an integral plot device. Engler says the aim is to make the Twitter integration organic to the plot, but we won’t find out if it is awkward having scenes where characters are texting 140-character messages from their phones or from their computers until the episode airs this Friday.

A neat feature Engler mentioned is that there is room for “ad hoc stuff,” referring to the potential for Twitter users to actually communicate with characters on the show. I’d tell Duke to shave.