SXSW Interview: Actor Wyatt Russell on Everybody Wants Some | The Mary Sue

SXSW Interview: Actor Wyatt Russell on Everybody Wants Some 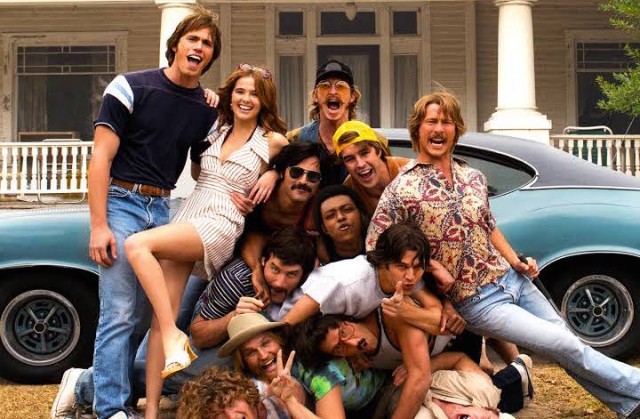 Since being announced as the spiritual successor of Dazed and Confused (not a sequel), Richard Linklater’s baseball-college comedy Everybody Wants Some has been considered a must-see, so it was no surprise when the Texas native’s movie was announced as the opening film for 2016’s SXSW film festival. On the heels of his Oscar nominations for Boyhood and Before Midnight, Linklater is earning high praise for his return to comedy, and like Dazed and Confused, the talented young cast will likely reap the benefits. One of those stars is 29 year old Wyatt Russell, who has building an impressive acting career for the past 5 years after his previous career as a professional hockey goalie.

After career-ending injuries, Russell decided dip his toe into the family business; his mother is Goldie Hawn and his father Kurt Russell. The back-up plans seems to have worked out with his starring role as Willoughby in Everybody Wants Some, along with his role in 22 Jump Street as another college jock and more serious films with director Jim Mickle. We spoke the day after the premiere at SXSW about the film and if the sports comedy will feel authentic to a former athlete.

Lesley Coffin (TMS): I spoke with Jim Mickle about two years ago, and I remember he couldn’t say nicer things about working with you.

Wyatt Russell: No way. The group on this movie has absolutely become a family, but working with Jim was the first time I realized movie making could be a great experience. I consider Jim and Linda Moran to be my movie family because of our experience working together on those two movies (We Are What We Are and Cold in July). They are the greatest people and so great at what they do. I love them so much.

TMS: It’s interesting that you’re doing a sports movie, considering your previous career in hockey. Did the moments of both hazing and comradery strike you as authentic, at least from your time on teams?

Russell: Absolutely. The comradery built in a relatively short period of time in this movie is really how team comradery is built in college. I played junior hockey in Canada, and you move up by being recruited. And you were the best player on your team or league, but when you are move up, you are back to the middle of the pack and have to fight your way back up. And in college, there are upper classmen who are four years older that you have to compete with. And in my college experience, I became close with my college teammates really fast, even though I only stayed for two years. And those guys from my team on UAH gave me some of the greatest memories I’ve ever had because of that closeness. I think baseball is a little different, but in hockey you are literally fighting for the guys next to you. And you can have a person you’ve played against one season, on the same team the next season. And it’s like all the past is gone and you are best friends. You could have gotten into a fight with the guy before, but all that’s in the past. And I think college athletes also start to live in a bubble, which this movie shows really well. Players are just together all the time.

TMS: It’s interesting to wrap your mind around the idea that all the teasing and fighting between the guys at the beginning is the way they become close, and all a brief period of time.

Russell: And that’s a big part of learning how to interact in that athletic world. They are in a competitive world and are inherently competing all the time, even with the guys on your own team, because you want to keep going up to the next level. And not everyone will make it up that ladder. So you have to be able to make that part of your daily routine, because if everyone’s trying to be nice to each other all the time, there’s no room for that competitive spirit you need to succeed. So there needs to be a balance between this, I’ll work with him and fight for him as a teammate, but we’re also going to make fun of each other for literally everything. Because that’s what it’s about and that’s what makes it fun. And they’re also all young. Athletes have a very limited time span to make a career. If you make it to 35 as an athlete, you are probably a millionaire. I only played until I was 24, but even at that age I felt old. You feel like your 50, because everything gets compressed.

TMS: Did the experience working with the cast and Richard mirror the character’s experiences in the house?

Russell: Oh my god yes. That is why I hope people enjoy the movie as much as we enjoyed making it. And I think the magic of the movie is people will feel that sense of joy we had on set. And Rick and the producers and Paramount set up this atmosphere up for us on set, and I can’t thank them enough for giving us three weeks to really become great friends. And I think the key to this movie is the friendship we established at that time that has lasted to today, that you can feel on screen. We are literally all on a text chain. They are a group of people I feel lucky to have come across. And that is thanks to Rick and the people he surrounds himself with. So yeah, absolutely. 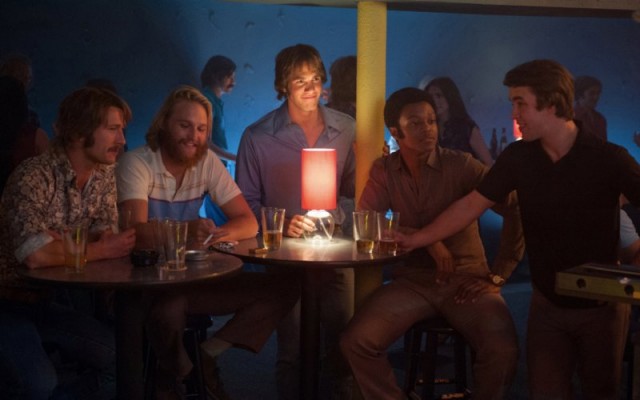 TMS: But your character is very different, because surrounded by all these competitive, alpha-males, you are just the king of chill who wants to sit back and observe with bemusement.

Russell: And part of that was because he’s a little older than the main characters. So my interpretation was he’s been around long enough that he’s already done all that and was over it. And that felt honest, because I’d been in fights as a youngster and jumped into a confrontation that ended with some guy jumping on my back. But as you get older you realize that’s just raging hormones. And Willoughby’s learned that too. He knows what’s going to happen, so he’s just going to sit it out and smoke a cigarette while they do what they’re going to do. And taking that approach felt right for the character, and I liked playing that kind of character. He’s really a fun, good guy.

TMS: I don’t know how the casting process went, but were you auditioning specifically for the character of Willoughby or just any part in the movie?

Russell: Everybody auditioned for the same three roles. And then Rick took the guys he felt fit each of the characters and assigned us those roles. So when I was assigned Willoughby, I had to think about how to make him a little different. Because I didn’t want to do a Matthew McConaughey impression or do Sean Penn in Fast Times. Those were iconic characters done at the best level. How do you make his character more than just a stoner? What’s interesting about him, what’s interesting about his take on the world. So I needed his age and experience to come through in those moments of goodwill he shows towards Blake (Jenner). The times when he’s real, takes him under his wing, and tells him, you’re going to be okay.

TMS: And your scenes with Blake, passing on that little bit of wisdom between pitchers, are probably the sweetest and most genuine moments in the movie.

Russell: They were awesome scenes to do. It’s easy to do those scenes when you are working with great people. And I understood them because I was a goalie, so it’s very similar to being a pitcher. It’s lonely being a goalie, its lonely being a pitcher. And the pressure is on you. You can get the win, but you are also blamed for the loss. And those are the only positions with their own win-lose categories, so you just have to embrace it. So that was a nice thing to have said to Blake, because I think that encompasses that wisdom is about more than just sports. You have to play by the rules, but sometimes you have to play by the rules your own way.

TMS: I know that you were raised in the industry and around movie sets, but was it a hard transition from hockey to acting? Just the inability to practice for roles and the downtime had to be a weird adjustment to make.

Russell: Before I started acting I wanted nothing to do with it, because hockey had been my everything. And people would say to me, why aren’t you pursing acting like your parents? And hockey had been a little bit of struggle to prove myself. Literally fighting to prove your worth gives you a true backbone. When you hear people yelling things about your sister or mom in the stands, you have to develop a little bit of a thick skin. So when I got injured and couldn’t play anymore, I decided to try acting. Hoping I’d be good at it and looking for another job that’s not really a job. So I tried it out and realized that a lot of the things I learned playing hockey directly correlated to acting. And from those experiences, playing hockey, traveling throughout the US and Canada, people I met, friends I made…that had been my acting class. I’ve felt all those emotions, everyone has, and I just need to tap into them. Now I just have to let loose and feel. And when I meet people pursuing acting who ask how to get started, I say go and just live a little bit. Travel, have an experience, and then come back and try acting. Without a true life experience that you can add to roles, I don’t know if you can truly capture the emotions of a character. 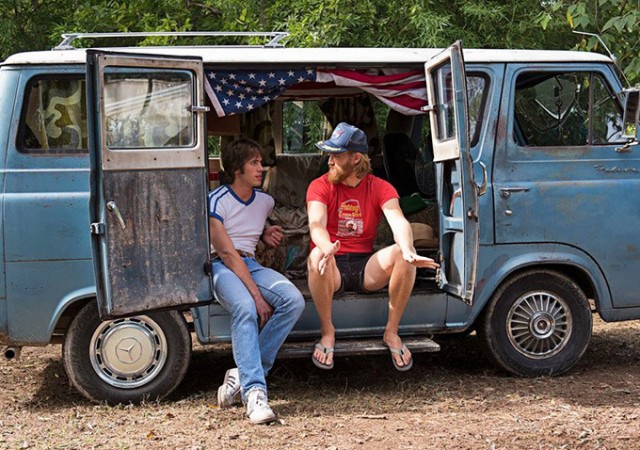 TMS: When you started acting, did you feel comfortable doing comedy?

Russell: I think I’ve always looked at the world in a humorous way. And I think that every great actor, those actors I appreciate and love, have a sense of humor and self-effacing quality. The ability to just finding the humor in any situation is what makes life fun. So that approach probably helped me get these comedy jobs, and now people are like “he does comedies, he’s the funny guy!” And truly, there are a lot of things I want to do besides comedy. And those projects I did early on with Jim were definitely NOT comedic.

TMS: I saw We Are What We Are and Cold in July before 22 Jump Street, so I was surprised how good you were at comedy.

Russell: That was what was so funny about 22 Jump Street. Because for me, that was an opportunity to show range. In We Are What We Are, I play a nice guy, in Cold in July I play a horrible murderer, and Jim finds humor in everything, but that doesn’t mean the humor is funny. But in this and 22 Jump Street, the humor is funny. But whether comic or dramatic, you always have to find the truth in the characters.