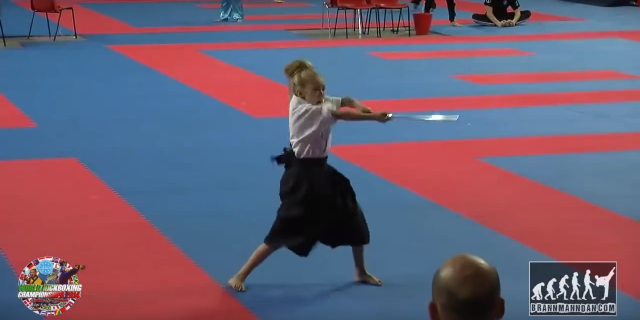 It’s not every day you run into a girl who knows her way around a sword, but one thing’s for sure: I want her on my team in a zombie apocalypse.

Jesse Jane McParland may be small in stature, but with a sword in her hand she’s lethal. The 9-year-old from Ireland actually competed on Britain’s Got Talent back in April (and made it all the way to the finals!), and in the video below you can watch her slay the competition by demonstrating her skills with a blade. (The epic music used to accompany her isn’t hurting one bit.) While she got her start in ballet and Irish dancing, she made the move to martial arts after realizing it was more her style.

If anything, this is proof that the term “like a girl” is being redefined all the time—and after watching this video and others like it, I’m pretty sure we can consider it more of a compliment now.

Anyone else picturing this girl in a Kill Bill prequel?