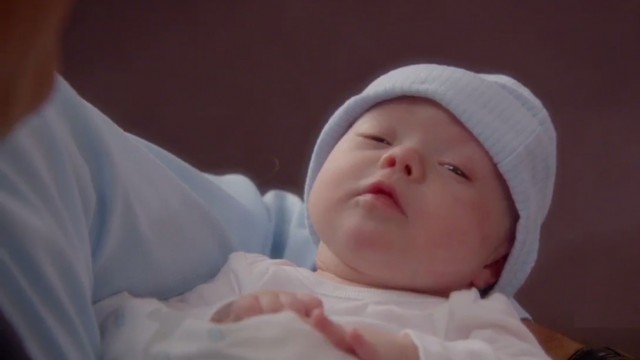 Gavin Bell in the season finale of Switched at Birth, courtesy of ABC Family/Disney.

Season 4 of Switched at Birth is coming to an end on Monday night, wrapping up some plots and providing an emotional capstone to the season with a kiss, a departure, a new baby, and a tease for Season 5, which was just announced. My attention has been entirely focused on that baby and his parents. A few months ago, Lily, the baby’s mother, revealed that the fetus had been diagnosed with Down syndrome. As a disability-rights journalist and father of a boy with Down syndrome, I’ve been hooked.

Switched at Birth is a Peabody Award-winning family drama that airs on ABC Family (soon to be rebranded as Freeform). The show follows the lives of two families whose daughters—Daphne Vasquez and Bay Kennish—were switched at birth in the hospital. As teenagers, the switch is uncovered, the families meet, and the stories unfold. Daphne is deaf, so questions of disability have always been at the center of the show. Although the plotlines are often melodramatic, the show possesses uncommon depths thanks to its consistent focus on difference and identity. In a recent article on the history of ABC Family, Jacqui Shine credited Switched at Birth as the first show to make the channel’s slogan, “’A New Kind of Family’ … mean what it implies today: families that represent the full spectrum of diverse identities, less superficially wholesome and more meaningfully honest.”

I interviewed show creator Lizzy Weiss for The Mary Sue a few weeks ago while the show was focusing on whether Lily would choose to have an abortion. Lily is a major supporting character, a hearing woman who is fluent in both British and American Sign Language. She became romantically involved with Toby, the oldest child in the central Kennish family, who for years has been charming and talented, but immature; conceiving a child has changed him for the better. In the episode when Lily and Toby decide to keep the child (and try to be a couple again), Bay takes Toby to visit a school for children with disabilities. In that scene, and those that followed, two things have been consistent: First, the show doesn’t try to hide the challenges that Down syndrome can bring, but always demonstrates that shared humanity and love trumps superficial differences. Second, I get weepy.

One recent scene in particular stands out. Lily is in a doctor’s waiting room and sees another mother and child. The mother happily chats about how her daughter is such a great reader, then reveals that she has an older girl, who is a fantastic athlete. The mother’s monologue is, in many ways, about recognizing sameness in your children, something Lily fears she’ll never feel. I’ve lived this many times, most recently standing in a luxury apartment of a famous professor as he and his friends seemingly competed in “child accomplishment tennis,” lobbing achievements of their kids back and forth as I quietly poured myself another drink.

In the resolution, Lily finds the strength to express her fears to Toby, talking about her denial, and together, they move forward towards acceptance and understanding. In the hours after my son was born and diagnosed, I remember holding my wife and sobbing that it wasn’t fair. Then, like this fictional couple, we began the journey from being overwhelmed by the differences between us and our child towards the recognition of all we share. I’ve never seen that particular emotional drama, one so vibrant in my memory, play out before on TV.

And now, as revealed in the promo for the finale, the baby is coming!

I spoke to Lizzy Weiss about the Down-syndrome plotlines in the time since Lily and Toby decided to have the baby.

David Perry: Obviously the first issue after Lily received her diagnosis was whether she would have an abortion. Once Lily decided to keep the child, with Toby’s support, what were the next themes for the remaining episodes of the season?

Lizzy Weiss: After Toby & Lily’s decision, the next piece was to have the family, particularly John and Bay, accept their decision and express support. The socks were meant to be a surprising and emotional way to have the family tell him that they were all in to help raise this baby.

The next really important story—one of my favorites—was to show lingering doubts on Lily’s part. I really wanted to be honest to the idea that just because you make the decision to keep the baby, that doesn’t mean the fears and insecurities are gone. I wanted to have Lily express sadness at what she wasn’t going to have, a feeling of loss for what she expected parenthood to be… all of those sentiments that are so beautifully articulated in ‘Welcome to Holland,’ and to show her shame at having those thoughts, and then to have someone say 1. It’s okay to feel that way. It doesn’t make you a monster. This is all really new and scary and you’re allowed those feelings. 2. You might be surprised at all of the things that your kid can do. And 3. This is going to be your kid. And the Down Syndrome part will come after the ‘this is my kid’ part.

The baby shower was just a natural outgrowth of story for us…What would happen next? The new mother would probably be thrown a shower. Okay, how would a shower for a baby with Down Syndrome be different? Well, it probably shouldn’t be any different but would some guests feel anxious or sad or precious and say inappropriate things? Probably. Okay, who would be most likely to say something completely inappropriate? Probably a woman of science. And then we realized we got to engage in a pretty interesting debate about eugenics and ask questions like ‘Do we want to eradicate difference? Why? Is difference necessarily a bad thing? Do we have to adhere to the notion that faster/stronger/smarter is better?’ And that’s a pretty radical question that I’m proud to say I’ve never seen raised on any other show.

David Perry: I was struck in the baby shower scene how Kathryn Kennish has become such an articulate and effective advocate on disability issues, so much so that I went back and re-watched season 1 episode 1 and her reaction to Daphne’s deafness. Can you talk a little bit about her development as a character over these seasons? Has John grown as much?

That’s such a delightful insight that you made and frankly, being inside the story all these years, I hadn’t even really made that connection. Lea probably has. But it’s true! She started off in the pilot completely freaked out by Daphne’s deafness, but part of that was simply because she couldn’t communicate with her daughter easily, and because she just hadn’t been around anyone (culturally) deaf before. It felt foreign and scary. And all these episodes later, she’s just — educated. That’s all you really need. Education and an emotional tie to someone you love. Similar to what we’ve seen in this country with gay marriage: the best way to change someone’s mind is to know and love someone close to you who upends any stereotypes you had in the past and turns you into a passionate advocate for their rights.

As for John, he’s rough around the edges but he’s actually a very loving guy on the inside, and an amazing dad. And I think he will defend his grandchild as staunchly as his wife, once he meets him.

David Perry: How does a show cast an infant with Down syndrome, assuming that was a real baby?

Lizzy Weiss: Of course that was a real baby! And of course we cast a baby with Down Syndrome! That’s how we roll on Switched at Birth. It never crossed our mind to shoot that scene any other way. And the answer to ‘how?’ is just a function of our amazing production. Our UPM Mary Church got really involved in this story, it touched her, and she spent her weekends meeting families and going on that socks photo shoot. She and our line producer Shawn Wilt (who are responsible for these nuts and bolts of our production) found a range of newborns and we chose Gavin Bell, from Apple Valley. He was about three months old when we shot the episode and he was paid actor scale! There is a talent agent who handles (I believe almost exclusively) actors with Down Syndrome, so there is a system out there to find whomever you need. Gavin behaved utterly perfectly on the day and we all fell in love with him.

David Perry: What are some of the other disability-related stories you might like to tell in future seasons? Can you give us any hints about what’s coming next?

Lizzy Weiss: We were just handed a Season 5, which I’m thrilled about, so I’m excited to dive back into stories that deal with disability. I don’t know yet what the exact arenas will be; my team and I will just see where the stories and the characters take us. But I do anticipate meeting the new baby as a little guy and seeing him become part of this amazingly diverse and loving family.