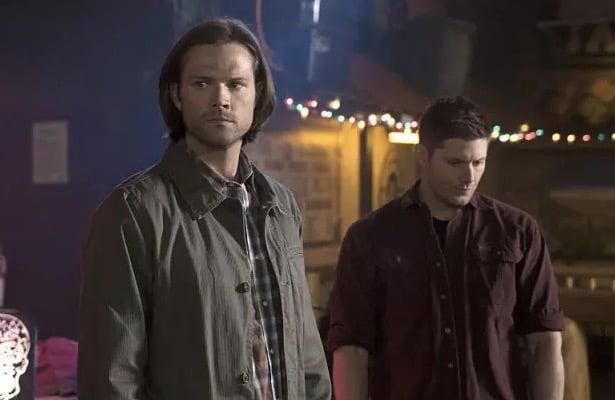 It’s no secret that the CW’s Supernatural is a problematic fave: there’s its wall-to-wall whiteness, its penchant for killing off women and people of color when they do appear, and its stubborn adherence to heteronormative masculinity—not to mention its fondness for the word “bitch.” For a queer female fan like me, it’s frequently frustrating and sometimes downright infuriating to watch. (Yeah, I still watch. I yell a lot.)

But this isn’t going to be a general rant. Instead, I want to call attention to a single syllable—a detail that might seem insignificant, but was deeply hurtful to some fans. In the March 2nd episode, “Beyond the Mat,” a soul-stealing demon explains that Hell is in chaos, that it’s “every demon for him/her/shimself.” Many viewers apparently believed “shim” to be a non-binary pronoun, like ze or xe; one even took to Twitter to offer “props” to writers John Bring and Andrew Dabb, to which Bring responded that he was “all for it.”

The problem is that “shim” isn’t a non-binary pronoun at all. It’s a transphobic slur.

“Hearing that ‘shim’ was used in an episode of the show that literally saved my life sent me into a tailspin,” says Ship, a transgender fan who “heard a loved and trusted grown-up call someone a ‘shemale’ at eight years old and wasn’t able to confront their own identity for another two decades because of it.” They’ve been disheartened by both the production team’s lack of response—repeated tweets to Bring, Dabb, and others have gone unanswered—and the sense that cis fandom would also prefer to sweep the nasty epithet under the rug. At the same time, they acknowledge the possibility that it could be a “well-intentioned mistake,” that the writers just didn’t know “shim” was a slur and may actually have been attempting to be inclusive.

Another trans fan, Dorkilysoulless, also generously extends the benefit of the doubt, saying that “real weight lifted when I saw Bring’s tweet” that made it seem like a well-intentioned misunderstanding in terminology, though he’d still “like to see it properly acknowledged with more depth … This is not a ‘burn the whole thing down’ moment for me. I just want to know that we’ve been heard, and make sure this becomes a step forward instead of a step back.”

Bring’s willingness to accept praise for perceived inclusivity, and his and Dabb’s silence since, is typical but disappointing. Transgender and non-binary fans have been some of Supernatural‘s most devoted supporters, and they deserve clarification and/or an apology. It’s the least the show can do.

Anna Andersen is a lapsed bookseller and freelance writer whose work has appeared on The Toast and The Archipelago (and AO3). She lives in Kansas with her husband in an apartment full of cats and books.