Why the Superman vs. Shazam Fight in Justice League Unlimited Is Such a Great Story 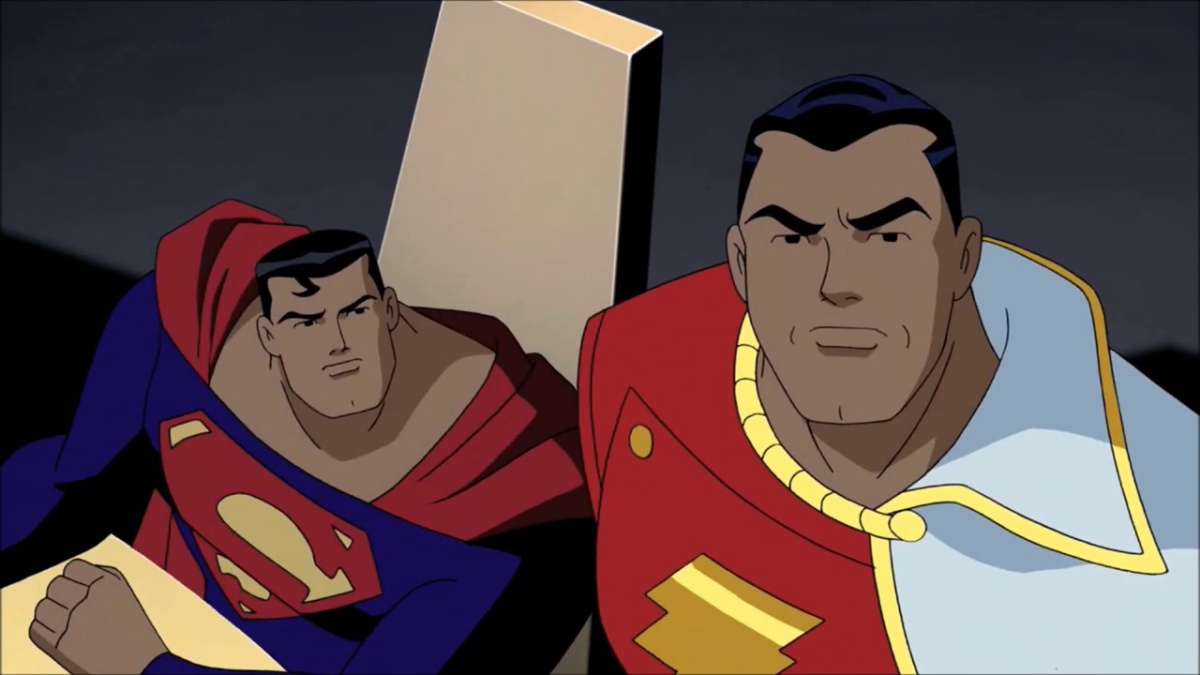 One of the complaints often leveled at Superman is that he’s a boring boy scout, but one of the things that Justice League Unlimited does really excellently is highlighting that while Superman, at his core, is a beacon of hope, truth, and justice, he’s also really petty sometimes. Just like President Obama in his second term, setting yourself up as an emblem for change can really age you, especially when your enemies are super good at playing political games, and the people looking up to you slowly see you as less an icon of change, but more a symbol of the old standard in a shiny face.

Didn’t mean for that to get super political, but hey, it’s comics.

Anyway, “Clash” turns the Superman vs. Captain Marvel battle into one of ideology and not just a dick measuring contest between two equally powerful characters. Superman is the Man of Steel, and Captain Marvel is the Mightest Mortal, so people already want them to fight, but when you have something to say, that makes it more powerful. In the episode, Captain Marvel joins the Justice League, but because he’s really a young boy, despite having the wisdom of Solomon, there is a bit of naiveté that causes him to bump heads with Superman.

Why? Well, Lex Luthor has truly and utterly gotten into Superman’s head like a bad meme. So when Captain Marvel arrives on the scene and makes an impromptu comment about Lex Luthor’s reformation and the fact that he’s running for president, the media picks it up as an endorsement from a superhero, and it ticks off everyone, but especially Superman.

Captain Marvel is determined to give Luthor a chance: “I believe in taking people at their word and giving them the benefit of the doubt.” In response, Superman starts acting like, as Starfire would put it, a real clorbag varblernek. In Superman’s eyes, Luthor has proven that he can’t ever be anything more than a supervillain, which makes him paranoid that something is going on—more paranoid than Batman, who asks, “Since when do you jump to conclusions without evidence?” A valid question, since Clark is a reporter in his day job.

Of course, Superman is right: Lex Luthor is a supervillain, using his public image to curry favor and Superman’s anger as a way to make the superhero seem unhinged to the world stage. Luthor plants a device in a tunnel and has a planted conversation with Mercy Graves that they know Superman will hear. Superman confronts Luthor about the device, and he says that it’s a new power generator for the complex, with Kryptonite as an energy source.

Billy Batson is at the event, transforms into Captain Marvel, and tries to calm Superman down, saying they should just send someone to check the device.

Superman instead decides to go after the device, and Marvel follows him. They end up getting into a fight, and Marvel is close to winning with his magic lightning (Superman isn’t great with magic) until Superman manages to switch them over, and Marvel gets hit by the lightning and turns back into Billy. He melts down the device.

… Which ends up being exactly what Luthor said it was after the Atom takes a look at it. So for all that rage and paranoia, the end result was Lexor City being heavily damaged and the League (but really Batman/Green Arrow) having to foot the bill.

It’s this conflict that causes Captain Marvel to leave the Justice League, an organization that he once idolized.

Because his true form is a young boy, Captain Marvel represents the innocence and goodness of a young kid, coupled with the nobility of a superhero. The character is almost perfectly Lawful Good/Paladin due to that. In comparison, while Superman is a “boy scout” to many, he is a grown adult who has a lot of lived experiences that have made him strong, but also cynical at times.

Yes, Superman was set up, and as the series progresses, all the things he was concerned about turn out to be true and valid. However, that doesn’t erase that he acted without logic or integrity—that he was so determined to be right that he attacked a fellow teammate rather than take a moment to think. In hating Luthor, he became more of a liability to the very people he was supposed to protect.

Captain Marvel, from the beginning, was considered “too similar” to Superman, and that’s why their clash was always something that fans wanted. For me, what makes “Clash” the best version of this story is that it places Billy/Captain Marvel’s youthful optimism against Clark/Superman’s learned cynicism and asks the question of whether you can still be a hero, a symbol, if you learn to hate your enemy.

It’s the kind of story that makes me hope that we can get some version of this conflict with Captain Marvel/Shazam and Superman in the future of DC movies, once DC figures out what it’s going to do with the Man of Steel.

What are some of your favorite Captain Marvel/Shazam stories?