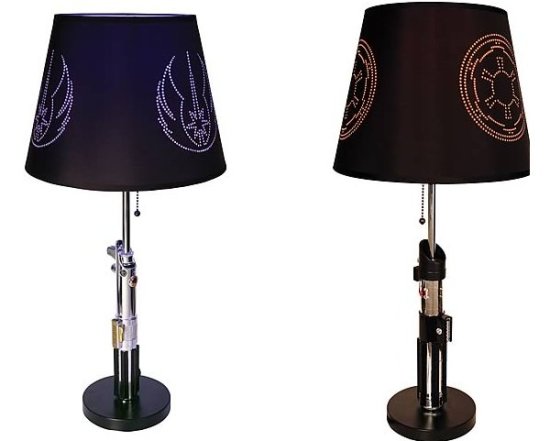 Not just a plastic lightsaber with a dim light that plugs into a wall, these super classy lightsaber lamps will add a touch of elegance to your living room, while letting your inner geek shine. (Get it? Lamps!) The lamps, which are currently available for pre-order and slated to ship sometime in April of next year, come in two models: A Darth Vader model, and an Anakin Skywalker model.

Available over at Entertainment Earth, both the Darth Vader model and the Anakin Skywalker model sell for $64.99 each. The Vader model sports a black laser-cut lampshade with the Galactic Empire emblem appearing on three sides, while the Anakin model sports a black laser-cut lampshade with the Jedi Knights emblem on three sides. Both lamps, which stand 26 inches tall, are designed to use a 100-watt bulb, though a blue and red bulb can be swapped in for authentic lightsabery effect. Turn your living room to the dark side, use a red bulb.