Less Sunspot Activity Is Not A Climate Change Fix 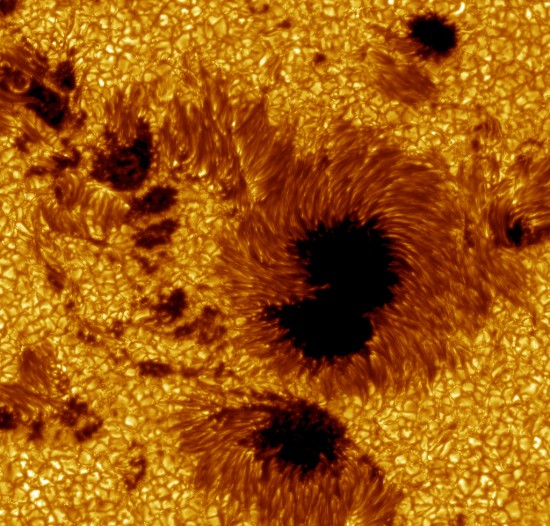 Recent reports presented at the American Astronomical Society meeting suggest that the sun may be heading into a period of less magnetic activity with fewer sunspots. Some proponents of this theory believe that the next solar minimum (a normal period of decreased solar activity) may be particularly long, lasting for several decades.

Analysis of a missing jet stream in the solar interior, fading sunspots on the sun’s visible surface, and changes in magnetic activity of the corona and near the poles suggest that an inactive period may be on the way. But the studies presented are a long way off from receiving scientific consensus. In fact, as Andrew Revkin of Dot Earth points out, there those in the astronomical community who think the evidence presented does not necessarily lead to the conclusion that there will be a long solar minimum.

So then media reports of a solar minimum that would solve the climate change crisis, come as a bit of a surprise. The idea is that the lack of solar activity could propel Earth into the next “Little Ice Age” or even serve as a solution to global warming. There is some historical evidence of cooling events and solar activity decreases occurring at the same time, but the two types of events are not strongly correlated.

Established scientific evidence shows that reduced solar activity produces a cooling effect on Earth of less than 0.5 degrees Fahrenheit. Certainly not enough to fix our global warming woes, particularly considering that scientists aren’t even sure yet that we are entering a decades long solar minimum.

Research published in Geophysical Research Letters in 2010 directly addresses the question of the effects on climate of a decades long solar minimum, and comes to the conclusion that solar minimum or no solar minimum the Earth is going to continue to get hotter. Against the backdrop of the 5-7 degrees Fahrenheit of warming predicted by the International Panel on Climate Change by the end of the century, a 0.5 cooling effect by a possible solar minimum would have negligible effects.

Researchers also note that periods of diminished solar activity do end, so when the sun returns to activity any cooling effect would be negated. Regardless of the speculation about the effects of decreased solar activity on Earthly temperatures, it is important to remember that researchers have not reached a consensus about a possible solar minimum so this is one story where people will just have to stay tuned. Just don’t expect a quick fix for climate change.