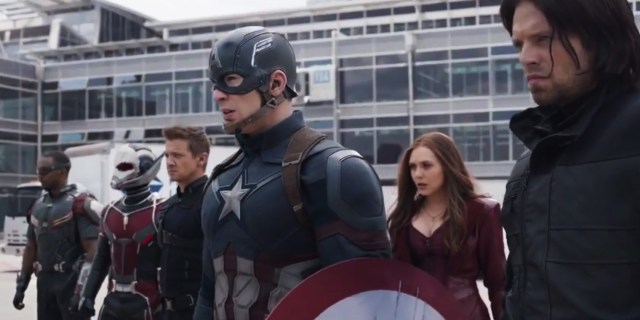 Speaking with Empire Magazine, Joe Russo, one half of the Russo Brothers directorial team behind Captain America: Civil War, has described the upcoming Marvel movie as a “love story” between Steve Rogers and Bucky Barnes. Russo went on to clarify, saying, “These are two guys who grew up together, and so they have that same emotional connection to each other as brothers would, and even more so because Bucky was all Steve had growing up.”

Bucky Barnes himself, Sebastian Stan, weighed in as well, possibly offering a bit of veiled commentary on Stucky shippers everywhere. He said:

I think it’s easy and generalizing it to say that they’re lovers, when you’re forgetting that one has a lot of guilt because he swore to be the protector of the other, the father figure or older brother so to speak, and then left him behind.

I have no qualms with it but I think people like to see it much more as a love story than it actually is. It’s brotherhood to me.

Sure, Stan might have a bit of a point. Bucky would harbor some serious guilt over the things he’s done to Steve, but that’s actually something I’m pretty sure fanfic authors everywhere have already considered. It’s not too much of a stretch to use that guilt as a plot device or conflict point to further define a relationship between the two, right?

As well, I don’t know that it’s “easy” or “generalizing” to say they’re lovers. It’s my belief that if they were lovers, it would make their relationship that much more complex. It’d add some very intriguing subtext that I’m 100% sure would make plenty of folks everywhere poop their pants.

All this being said, there’s nothing wrong with brotherhood, let me say that right now. It’s clear that these two love each other, and that doesn’t necessarily have to mean they’re lovers–platonic friend love is a thing, friends (and it needs to be exhibited more, but I digress).

We’ll be able to draw our own conclusions, I suppose, when Captain America: Civil War opens on May 6th. What do you think? Are you worried about your Stucky/Starbucks/Winter Shield/Barnes & Noble ship?