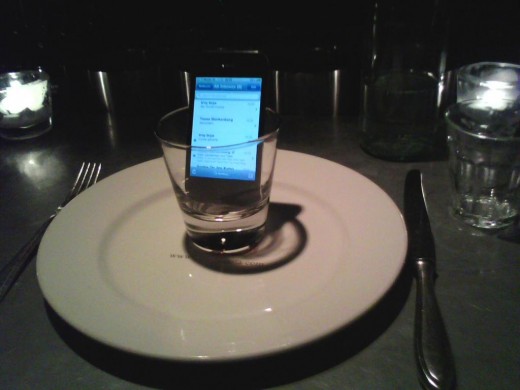 I guess the above picture explains it all. Reported over at The Next Web is a firsthand account of losing reception at a famous restaurant in Amsterdam, Pasta e Basta, and a seemingly silly trick to gain reception, which actually ended up working:

Apparently I looked disappointed because the waiter came over right away and asked me “Can’t get a signal?”. I nodded and shrugged. Oh well. Then he offered “Do you want a glass?”. I figured he offered me another drink to cope with my disappointment but as I hadn’t even touched the Prosecco yet I thanked him and declined. But then he said “No, I mean for your iPhone!”.

Now I was confused. What the hell would I need a glass for my iPhone for? He smiled and said “It improves the reception. Here, look!” and he pointed to a row of phones, stuck in glasses, on the top shelf behind the bar.

Apparently, a few years prior, a waitress discovered that putting a phone in an empty glass improves reception. In the above anecdote, the iPhone 4 in question went from zero bars, to three, with no 3G reception, but some GPRS.

Now that I’ve heard this account, I finally have a theory as to why a person had his iPhone 4 housed in a glass in an apartment I once viewed. I thought it was a humorous phone dock, but now I know it could’ve been an ingenius way to make his poor phone work in New York City.