Why X-Men’s Storm Is the Rightful Ruler of Wakanda The Marvel character Storm is not only a staple of the X-Men franchise, but also a notorious fan favorite. From her epic weather control powers to her unique style, Storm has stolen the hearts of many. Created by writer Len Wein and artist Dave Cockrum, she’s one of the first and only Black woman superheroes in Marvel comics.

Most viewers are familiar with Storm through the X-Men movies, but they don’t know just how much more powerful the character is in her comic book lore. The movies have yet to introduce Storm’s origin story or place much focus on the character, but now what Marvel Studios has the X-Men movie rights back, it may finally be time. However, they are very far from depicting the comic book storyline in which Storm became the queen of Wakanda. Although she’s technically not the queen anymore in the comics, the Earth-shattering weather goddess should be sitting on that throne.

Before analyzing why Storm is the rightful queen of Wakanda, it’s important to understand the experiences that make her the best option. In Uncanny X-Men #102, the creators unpacked Storm’s backstory.

Before she was called Storm, her birth name was Ororo Munroe, and she is the daughter of a Kenyan queen mother, N’ Dare, and an African-American father, David, who worked as a photojournalist. She was born an African princess with royal blood and a natural flare for leadership.

Storm’s geopolitical upbringing is a key element that makes her a vital queen, as she was raised in Harlem, New York City and Cairo, Egypt, which gave her an understanding of Black female identity in both the United States and beyond. Her parents were killed during an Arab–Israeli conflict in which their home was destroyed when a plane crashed into it. Buried in rubble after the crash, Storm developed chronic claustrophobia for the rest of her life.

Storm’s life not only made her incredibly powerful, but also gave her a very unique perspective. Her navigation of the world as both a Black American woman and an African woman allows her to access a heightened “double consciousness,” as W.E.B. Du Bois coined.

In his famous work, The Souls of Black Folk, Du Bois explained that Black people are “always looking at one’s self through the eyes” of a racist white society, and “measuring oneself by the means of a nation that looked back in contempt.” This doesn’t mean that Storm saw herself in a hateful way, but she understood at a young age that conflict exists because of anti-blackness, sexism, and in her case, being a mutant. 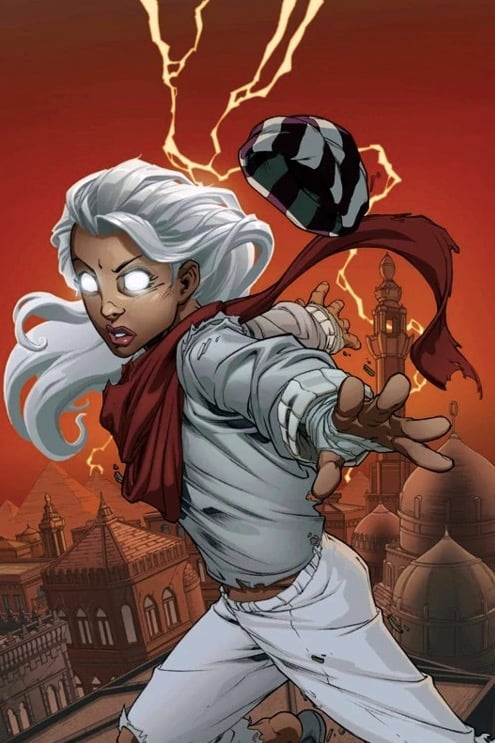 As a Black woman and a mutant with ties to Africa and America, plus an impressive lineage from sorceresses and priestesses, Storm exists within the complexity of several intersections of identity, while also bearing the weight of her struggles. Befittingly of her powers, there is a series of conflicting elements within her that contrast and compliment her in a multiplicity of ways. She is always aware of how others perceive her and knows how to survive anywhere.

She had to become an expert thief to survive on the streets after her parents died. Then, she met Professor Xavier and joined the X-Men, eventually becoming the leader of the team and strengthening her mutant powers. She also overcame trauma and contemplations of suicide after temporarily losing her powers. She’s been a member of the Avengers and the Fantastic Four, as well. She even defeated Wonder Woman in a Marvel and DC crossover battle. All of her victories and trials have prepared her to lead Wakanda.

Storm met Black Panther (T’Challa) when they were children, and she saved him from kidnappers in Kenya. While they cared for one another, their leadership roles kept them apart, until Black Panther volume 4: #14 and #15, when Black Panther proposed to Storm, and they married.

Their wedding catalyzed a ceasefire between the X-Men and Avengers, who were warring over the Superhero Registration Act. Their marriage represented peace and solidarity in a time of conflict and had a major impact on both the supernatural and human worlds.

Although Storm and T’Challa divorced 12 years later due to being on opposite sides of the continued Avengers/X-Men conflict, Storm is the most ideal leader of Wakanda, as she understands Black identity in not only a nuanced way but also through an intersectional womanist lens. She reflects what authors and scholars Alice Walker and Layli Maparyan defined as womanism, which seeks to “restore the balance between people and the environment/nature and reconcile human life with the spiritual dimension.” Storm’s elemental powers and wisdom help to reflect the multiplicities of Black life and power.

She illustrates what it means to be a Black woman as she fights to oppose stereotypes, violence, and commodification. From Kenya to Harlem to Cairo, and then eventually Wakanda, Storm continued to persevere. Even when temporarily losing her powers, Storm exhibits resiliency and protects others, and herself.

Storm is not just a mutant; she is also a Kenyan princess and a Wakandan. The throne and allegiance of the people is still her right. Storm has also been a member of both the Avengers and the X-Men, and she is the strongest bridge between them. Just like the elements that she can control, when war is raging like a storm, she is the one who can control the chaos and restore peace.