As if a McElroy-adjacent show wouldn't be quality. 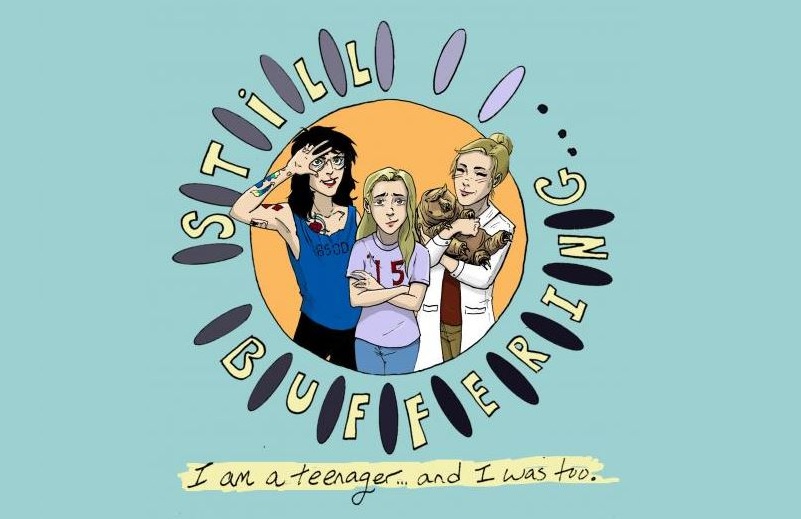 Years ago, the McElroys joked about a counterpart to their show My Brother, My Brother and Me called My Sister, My Sister and Me. While that did eventually come into existence as a one-off bonus for donors to the Maximum Fun network, the public at large was left bereft of a weekly source of sisterly goofs. Into that void came Still Buffering, a podcast hosted by three sisters–two in their thirties, and one still in high school.

Longtime listeners to the McElroy dynasty of products will recognize the oldest sister, Sydnee Smirl-McElroy, as the cohost of the medical history podcast Sawbones. In fact, there lies the real germ for this whole thing: Sydnee’s teenage sister Rileigh made a few guest appearances on that podcast while Justin McElroy was away, and those episodes proved popular.

It’s no surprise, then, that Still Buffering has a bit of a Sawbones feel to it. It sits at the PG-rated crossroads of infotainment and warmly delivered dad jokes (and dismay at same), setting an easygoing conversational pace. Each episode focuses on a broad topic–health education, parties, driver’s ed–that then serves as a compare and contrast session from one generation to the other. There’s a solid balance between bafflement/”oh no, I’m old and out of date” and nicely genuine moments where one sister gets to share something across the age gap for the other person to enjoy. And yes, as someone who now officially counts as An Old, it’s nice to get a brief snapshot about what Kids These Days are into.

The show has a fairly good sense of itself from the beginning, but it really hits its stride when the middlest sister, Teylor, drops in as a guest star. The addition so immediately strengthens the rapport–with Teylor standing for the nerdy, anime-watching, and goth-leaning (former) teens among us–that she immediately becomes the show’s third member. The addition of a third perspective does wonders for the breadth of the show’s conversations, but since Teylor and Sydnee grew up together there’s a common ground keeping the whole thing unified.

Content is at its sharpest when it gets down to brass tacks. The nature of the beast is that these are three people talking about their individual experiences, and part of that means that the moments when they’re explaining broad strokes trends or bits of past popular culture can get a little frustrating. There’s bound to be at least one moment where you remember a thing and want to reach through the earphones and scream about the completely different way you remember a thing, or a crucial adjacent thing you loved that they don’t touch on. All shows with an element of nostalgia fall into that at some point or other.

The personal stories are what bring it back around, whether it’s Teylor’s story of the most elaborate birthday prank involving a pretend serial killer rumor or the incredibly poignant and raw episodes about eating disorders and fears of gun violence. It’s not always the most laugh-out-loud funny show, but its tone gives it a lot more room to flex into heavier subject matter when the situation calls for it. And there’s plenty of built-in room for the show to evolve as Rileigh goes through her last few years of high school and beyond (though what the show’s fate will be when she reaches the end of teendom, I suppose it’s too early to say).

And unlike MBMBaM, which definitely was born from and thrives off of the relationship between the three brothers but doesn’t necessarily spotlight it often, Still Buffering almost effortlessly captures the essence and affection of a good sibling relationship. It’s the kind of show that ends with you wanting to call your own family, found or blood, just to hear their voice. And if nothing else, Rileigh’s a little beacon of hope that the next generation might probably turn out okay. Even if I can’t believe she’s a fan of The Vampire Diaries but not their glorious, trashy older sibling The Vampire Chronicles (that was sarcasm…mostly).

It’s a bit difficult for me to estimate how universal the listening experience–since I both grew up in the 90s and have a decade-plus age gap with my siblings, I’m pretty well in the target demographic–but I can wholeheartedly recommend giving it a shot. If you like goofy, gentlehearted shows with charming hosts, this one is definitely a winner.

I recommend giving “How (Not) to Party” and “How to Sweet Sixteen” a try as starters. And for all you Lin Manuel Miranda fans (that is to say, all of you), he dropped by as a guest during “How to Theatre.” The show’s not quite a year old, so that gives you a pretty manageable backlog of episodes if you find yourself hooked. Happy listening.

Vrai is a queer author and pop culture blogger; they’re actually very serious about those trashy vampires. You can read more essays and find out about their fiction at Fashionable Tinfoil Accessories, listen to them podcasting on Soundcloud, support their work via Patreon or PayPal, or remind them of the existence of Tweets.