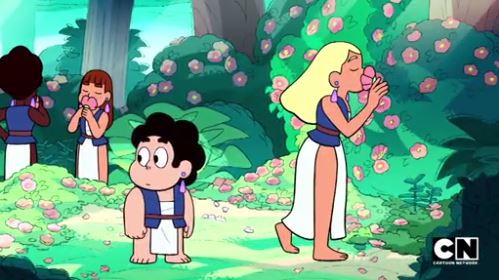 The Recap: Steven and Greg spend time with the humans in the zoo, who’ve never seen Earth and have adapted to following the orders of an automated voice in their earrings. Trying to find a way to open the service door to the outside, Steven and Greg wind up introducing unknown concepts like “choice” and “hurt” into the colony and throw its inhabitants into chaos.

When the phrase “human zoo” came up, I admit I was half-imagining a sort of G-rated version of the alien abduction sequences from Slaughterhouse Five (admittedly, I’m not sure what that looks like either). But nope! We’re in full lotus eater mode with this episode. Which makes sense, given how carefully modulated these humans’ lives are.

Now that we’re out in space, it seems that SU has decided it’s time to tackle a well-worn setup in science fiction, which itself builds on one of the oldest questions in literature: given the choice, is blissful ignorance better than often painful free will? Most major sci-fi stories lean pretty hard toward the latter, particularly as you get into the “harder” sci-fi (to be expected, if the writers are themselves science-minded).

Emotionally driven as this show is, though, the answer isn’t so clear cut. It seems natural that the question of choice in interpersonal relationships would come up, given the past exploration of issues like fusion and the re-emphasis this arc on Greg’s still-present grief. While the episode ends on the explosive note of the zoo humans panicking over the notion of sadness, I would doubt that’s an insurmountable hurdle once the shock has passed.

Beyond that, there’s a sense of “live and let live” about the whole colony, which, aside from being in space, isn’t so different from previous side characters attempting to live happy lives within their given circumstances—though the episode can’t really go into the more uncomfortable implications going on here: the “little voice” talks to the zoo humans like preschoolers, but also puts them into pairs; is sex even part of this society? Has sexual desire been bred out but romantic connection allowed, since heterosexuality clearly isn’t a default norm? Are new specimens grown in a lab, which would be in keeping with Gem creation and explain why none of the captive humans are familiar with pain? After all, what are they going to do? Learn to pilot a space ship? Head out into the great unknown to starve or be killed? Reach a new planet that’s harsher and not guaranteed to be survivable, because that’s better than the vague notion of captivity?

Greg comments on utopias always having a downside (and by the way, I’ll be crushed if we don’t get a glimpse of past heartbreaker Greg now), but it’s minuscule in relative terms to the rest of the genre. There’s no cultish sacrifice behavior or even threat of violence from the Gems to force these humans to move for their own safety. Assuming things don’t melt down completely following the confrontation next episode, it seems thematically likely that things would push toward a symbiotic relationship of some sort–something akin to Peridot’s proposed plan for Earth as a viable Homeworld resource. The social order within the zoo is already somewhat akin to the mentality of the caste system, albeit with a singular divide between the voice and the humans rather than divides of power within the group dynamic. While that has the potential for harm, it’s also a mental common ground to start from. And it would make a great small-scale tactic in this war the Gems can’t possibly hope to win otherwise—changing small groups at the fringes of society and eventually witnessing a cumulative effect.

This is one of those cases where it’ll be something of a relief to leave this storyline behind to ferment for a while. The various ways this situation could develop, positive or disastrous, are all ultimately incremental—that, and the fact that those babyish affects are cute for ten minutes but not for extended, multi-episode arcs, though I highly doubt that this will be the last we hear of them.

As this Bomb draws to a close (despite playing a two-parter on Monday, it’s only a five episode run in total), I find myself hoping that we won’t be returning to Earth just yet. First for the fact that leaving Lapis, Peridot, and Connie there alone holds the promise of comedic bonding gold, but also because we’ve spent so long hearing about Homeworld as a distant threat. As we begin to catch glimpses of them as rounded villains, the prospect of running full-tilt at those plot possibilities only gets more enticing.

But, of course, that’s never been how the show’s structured. There’s still the issue of Jasper back on Earth and unanswered questions about Rose’s time there; not to mention the fact that the Crystal Gems can only fight with guerrilla tactics at this point, and staying away from Earth any longer than necessary yields far more risk than reward.

I say all of this semi-wrap up stuff this time knowing that we’ve got the return of Blue Diamond next episode, and a high probability of music as well. This is all just pre-cleaning in case the superlatives wind up taking up the entire word count. See you tomorrow!

Vrai Kaiser is a queer author and pop culture blogger; they were not prepared for these Blue Diamond feels. You can read more essays and find out about their fiction at Fashionable Tinfoil Accessories, listen to them podcasting on Soundcloud, support their work via Patreon or PayPal, or remind them of the existence of Tweets.