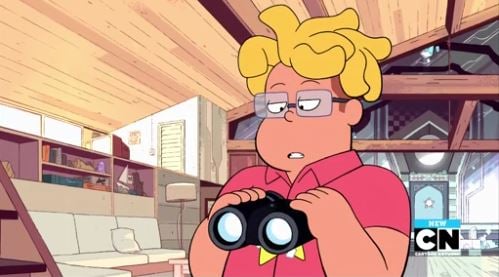 The Recap: After learning that his views on “rock people” were misinformed, Ronaldo decides to correct the problem… by declaring that he’s joined the Crystal Gems.

Well, would you look at that. It took us four seasons, but we finally got a good Ronaldo episode (I’d make a joke about monkey paws, but frankly with the latest kicking of awful legislation it’s feeling a bit too raw). The problem with previous episodes focused around Ronaldo has always been twofold: he’s a character who’s variably a critique or a parody but not in a very focused way, and letting him be the narrator tended to boil down to basically one joke for 11 minutes. These two things combined to make him a pretty flat character, which grew more and more obvious as not only secondary but tertiary characters all got better development.

“Rocknaldo” solves both of these problems. Settling down with a concrete idea of how Ronaldo’s character functions against a concrete issue rather than as a vague strawman helps enormously, and the thematic subject matter of “how (not) to be a good ally” is only ever more relevant. In some ways, this is a far more successful do-over of “Gem Harvest,” hitting on the same allegory but working with in-universe logic rather than dropping in very potent real world terminology that then doesn’t get dealt with.

The storyline here isn’t quite subtle, but I don’t think it has to be – particularly for an issue that’s addressed relatively rarely in all-ages media. This dance of someone being called out, declaring an intention to make good, and then making it all about themselves is so real it practically pops off the screen; and Ronaldo’s antics are given weight and consequence because of Steven’s role in the story, who’s genuinely hurt and upset rather than being able to just roll his eyes and walk away.

This episode isn’t afraid to let Ronaldo be genuinely nasty, either, which is a point in its favor. Ronaldo screaming about the conspiracy of the snake people feels like a caricature – yes, there are hardcore conspiracy theorists, and definitely teens who take a fancy to that stuff as a way to feel “in the know,” but it never felt grounded in the way other Beach City residents did.

Ronaldo complaining that Connie is on the team because she’s “Steven’s girlfriend,” as if that’s the only reason he, a white cis man clear expert on Crystal Gems, was passed over? That’s ugly, more so because you can see both that Ronaldo is doing it out of hurt jealousy at being excluded, and that the former has led to him then diminishing others because of years of learned societal entitlement.

The passive aggressive comments Ronaldo makes when he announces himself open to learning about this marginalized group, only to find he’s not immediately the star of the show and the most lauded part of this community, is something I see play out on Twitter all the time. For the most part this episode feels quiet and mundane, without much in the way of dramatic action or even much slapstick, and that only serves to better highlight the conversational barbs.

The script climaxes (Florido and Zuke are in really fine form here) with a speech from Steven that’s exactly as blunt as it needs to be. Yes, the Crystal Gems are about love and acceptance, but that’s a street that cuts both ways. And when you’re a stranger to something, especially a marginalized group, part of learning is remembering that it’s not always about you. Even if you’ve been invited, you still have to put in the time and remember that people have lives outside of teaching (which they’re not required to do, either; the emotional toll this episode takes on Steven is reflective of the emotional toll being constantly dissected can have, even if the other person means well).

That could’ve been it (if this were a previous Ronaldo episode, it probably would’ve ended when they dropped him off at home). But the final minute or so brings SU’s aspirational tone into play, showing off what makes the show so great at its heart. Yes, Ronaldo needed to be brought to task for how he was acting – but Steven’s still willing to offer an olive branch after.

More importantly, Ronaldo’s finally shown an ability to internalize consequences, fixing the other thing that’s been suffocating the character for years now. He’s not only proving he’s sincere in fixing his mistakes, but asks Steven honest questions and is prepared to adjust his interactions depending on the advice he gets. It’s a baby step, but in comparison to previous outings, it’s an Olympic long jump. And really, that’s all the character needed. Just SOME sense that there’s enough growth going on here for it to be worth our investment.

Next week is a return to an old topic – Steven and Amethyst’s wrestling double act from season one. I’m… quite interested to see how that’ll be made relevant again, I’ll be honest (I have a soft spot for the original episode, with its applicability to discussions of dysphoria). Hope to see you there!

Vrai Kaiser is a queer author and pop culture blogger; they didn’t mention it, but know that Amethyst got all the best lines this episode. You can read more essays and find out about their fiction at Fashionable Tinfoil Accessories, listen to them podcasting on Soundcloud, support their work via Patreon or PayPal, or remind them of the existence of Tweets.