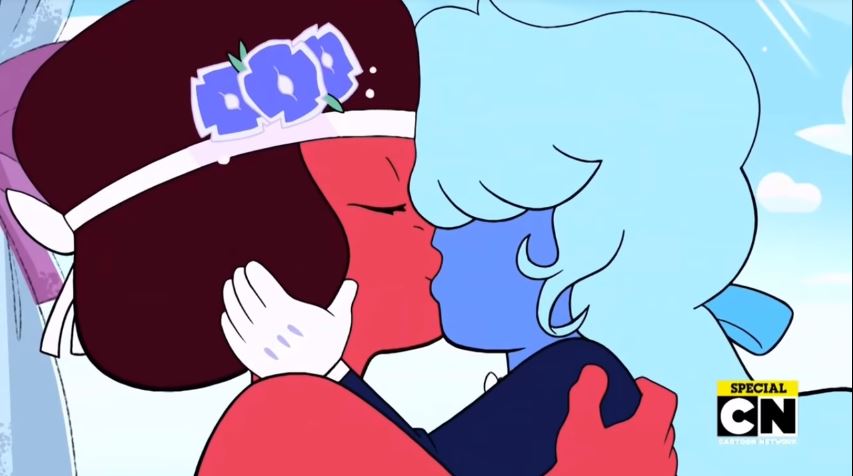 The Recap: Ruby and Sapphire have their wedding and refuse into Garnet with all their loved ones present; the reception is crashed by both Blue and Yellow Diamond, who seem to have the upper hand until Steven is able to communicate to them—by psychic ghost, of course—that he is really Pink Diamond.

A lot can indeed happen in 22 minutes. It feels like they’ve had this one in the back pocket for years—and held back on it a bit too long, maybe—but there’s no denying this is an irreversible gamechanger for the series. In fact, it seems to confirm all the more that we’re heading into the final stages of the series. And if it looks this fresh all the way there, I couldn’t be happier.

This is a masterful episode, the product of four boarders that nonetheless manages to hit every note of the show’s greatest strengths. Starting with a literal note. The opening musical number has a stagey pluckiness of the kind the Muppets used to great effect once upon a time, checking in with each gem’s emotional state so that the two episodes can mirror each other during the big psychic climax. It also sets the tone well, with Zach Callison’s impressive falsetto urging us not to forget the bad things, but to enjoy the joyful parts of life in spite of them. It’s pretty darn catchy, too, with mini-skits and choreography designed to suit each unique character interaction.

The wedding is…well, it’s an enormous watershed moment for all-ages television, there’s just no understating that. The show takes a firm stance not just with the ceremony itself but the decision to put masculine Ruby in a dress and femme Sapphire in a suit—I can practically see the boarders at work, their tired, tired eyes fixed directly on the internet rats scrambling for the last vestiges of “well they’re coded like a male/female couple!” And maybe the Russian dub with its extra efforts to masculine-code Ruby, too. It’s a level of passive-aggressive gay spite that I can appreciate.

And maybe most importantly, it’s a complete moment. Plenty of fictional weddings get interrupted at the altar, but we and Garnet are both given time to soak in the triumph of what this means for the characters and for media representation. It does indeed let us think about joy, and love, and cake before things get serious again.

The big battle is excellently paced, with a great deal of thoughtful planning. In big battle scenes it’s very easy to lose track of the cast and narrow down to just a handful of characters, but the blocking here is focused on making sure each combatant both gets a moment to shine and contributes in a way that shows off their unique approach to fighting. It’s a solid fight scene in its own right before things inevitably to the metaphysical.

I believe I said some years ago that Steven Universe is too influenced by anime, particularly 90s anime like Sailor Moon, for the climactic battle not to involve some kind of psychic battle powered by Feelings™. It’s cheesy and expected but in a great way. The episode is full of those kinds of moments, in fact. Of course Lapis was going to come back just as everyone was in a dire pinch (and her moment of strength against Blue Diamond was a particular joy–not depression as super power but a statement that being a survivor does indeed make you stronger, even when working through darkness feels impossible and insurmountable; it’s a great grace note on what they’ve been trying to do with her emotional arc). Of course there will be rousing speeches just when everyone is just on the verge of giving up. Those story beats pop up time and again because they’re really satisfying when the audience has proper emotional investment.

Sincerity helps too, and it’s here in spades. It’s what makes Steven’s reassurance to each of his loved ones feel earnest rather than pat and irritating. Half of the battle is literally fought on the idea of throwing feelings at one another. It’s so nakedly itself, so unashamedly stepping onto the proud shoujo battleground of fusing the feminine-coded power of feelings with masculine ideas about fighting and war. It is made of and with love, and there is catharsis when it’s over.

This is far from a satisfying conclusion for the series as a whole. One couldn’t walk away here and feel like everything was solved. There are too many character beats left open—Connie’s sword is broken, Lapis and Peridot need to talk, Lars is still in space, Bismuth has friends to make—not to mention major plot issues like the yet-unseen White Diamond (whether fusion or bespoke gem) and the corrupted gems. Rather, this feels like firmly closing the door on a volume.

Which means, of course, that the show now has no choice but to firmly commit to the change in status quo. Folks have been griping to various degrees about Beach City episodes for ages now, but this is the point where gem issues have well and truly taken precedence. Back away from this now (or hit the pause button after the next episode does a hurried wrap-up) and it will do damage to the overall feel of the show to fall back into the usual routine.

Still, I want to believe. Let’s be honest, I’ve been investing in this show for too many years not to. It’s unclear when airing dates will pick up again (or indeed, when any future leaks may occur), but rest assured that I’ll be there.