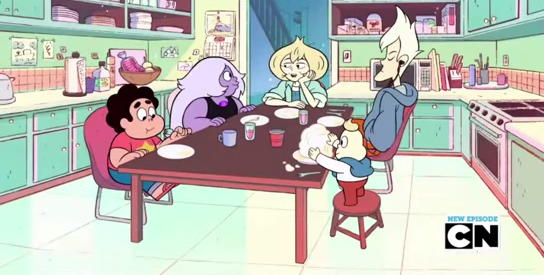 The Recap: Amethyst and Steven pay a visit (well…after a fashion) to Onion’s house, where Amethyst reunites with her old friend Vidalia. Meanwhile, Steven spends an interesting afternoon with Onion.

We’re looking at a foundation episode, folks. As far as the current arc goes, there’s not an enormous amount to discuss here: we’re given another look at how Amethyst is dealing with the tension at home, and simultaneously how much more mature she is (season one Amethyst would’ve surely lashed out by now, reacting to her lack of control over the situation with aggression). It’s also the second time since the Sardonyx incident where we’ve seen Steven starting to withdraw: as he listens in on the stairs one gets the sense that his reaction to learning that Amethyst is also being troubled by the fighting will be to start keeping his own worries more to himself. Rose was known for keeping secrets, after all, and I wouldn’t be surprised if we’re seeing her son begin to take after her. Also Vidalia is pretty great (she reminds me of the charming painter in Kiki’s Delivery Service) and I’m hoping we get to see more of her when things are a bit less dire.

There’s a few nice world building details too, like the likely origin of Rose’s painting and the fact that Vidalia hung around Greg even after Marty was gone. And the timeline’s gone all weird again. The only real downside to the way the episodes are structured is that the threat around Peridot and Malachite sort of comes and goes as is convenient—in “Keystone Motel” Pearl had been looking for Peridot for three days straight, but this episode more or less sets that aside entirely (although to be fair, Amethyst’s “we have nothing else to do” excuse is quite blatantly an excuse not to think about Serious Stuff for a while).

But as I said, the promise for the future is by far the most tantalizing thing going on here. Onion’s been out of the spotlight for a long time (he’s made some cameos, but “Onion Trade” was the only one to fully focus on him—that, by the way, was the show’s 15th episode. This is its 65th), and leaving him at the edges of the show has helped craft an almost legendary aura of mystery around the kid. Some people think he’s a Gem or other alien, a criminal mastermind, or some kind of outright eldritch abomination.

The lack of detail from Onion himself left people a lot of room to go wild, and Steven’s uneasiness about the kid comes across as the biggest nail in the coffin. This is the kid who’s still refusing to give up on Peridot, remember (and I won’t until he does). Steven’s been a pretty reliable emotional barometer for the viewer—if he likes someone who seems awful it’s probably worth waiting around for them, and if he doesn’t like someone then things are gonna get real bad, real quick.

Which is why it’s such a pleasant surprise to see this episode pull a reversal of sorts. Steven’s attempts to escape Onion’s house are relatable (who hasn’t had the one bizarre neighborhood kid or cousin you had to put up with because your parents liked each other?), but none of the strange behavior we see from Onion ends up being particularly dangerous. It is undeniably weird that he has a tape of his own birth and thought it would a great thing to share with Steven, but it’s not going to cause a universe-unraveling meltdown. The episode’s most unsettling moment even ends up becoming its sweetest, once it clicks that the little mouse chilling out in Onion’s mouth (totally logical, i mean the kid doesn’t have pockets – where else was he supposed to put it?) was probably the same one Steven felt so distraught about having to feed to the snake.

While it’s still possible that there’s some kind of supernatural secret behind Onion as a character, but I don’t think that’s the heart of his character. More than anything, this episode shows us a little kid eager to make friends who has a pretty outlandish approach to doing so. In fact, it would almost feel like a waste if Onion’s eeriness were to pay off in some kind of cosmic revelation. The fact that Steven Universe, world’s most understanding kid, is unsettled by a totally mundane kid is its own brand of interesting.

No one could ever deny that Steven has an extraordinarily kind heart and maturity well beyond his years at this point, but the last few episodes have reminded us that he’s also still 10(ish). And at that age it’s very normal for kids to settle into thinking of their own lives as the normal ones and everything else as kind of weird. Accepting difference at that age can be difficult, and the things that trip people up aren’t always what you’d expect. It’s not always (though it certainly can be) different family arrangements or cultural backgrounds. Sometimes you just cannot stand that this person doesn’t keep any soda in their house, and they have the weird store brand cereal.

Being a half-Gem, Steven’s always been the most unusual person in the room, literally unpredictable in terms of his Gem biology and the understanding gateway to alien and magical activity for the humans of Beach City. He’s had to defend his home from monsters and other Gems, but he’s never had to think about the difference of others in quite this way before (as a thing that unsettles him despite not being a threat), and that’s a good experience for him to have to work through. And it’s clear that while he’s definitely trying (his and Onion’s bonding over the Guy and Gal figures is very sweet), he can’t quite shake those chills in the pit of his stomach.

Multiple people have suggested that Onion’s behavior might point to him being non-verbally autistic, and while I’m far from qualified to speak on the subject I like the idea of Steven (for whom sharing his feelings comes as naturally as breathing) becoming better friends with someone who has a fundamentally different means of communicating with the world. If anybody could explore the topic without that slightly gross Very Special Episode feeling, it would definitely be Steven Universe. And since so much of Onion’s comedic creepiness (especially in this episode) comes from the unnerved perspective of the people interacting with him, it would be fascinating to see the sort of character he becomes when (undoubtedly when, because this is Steven we’re talking about) that perspective changes. Like I said, delicate stuff. But it’s going to be a really fun pin to check on in about six months.

I also cannot deny that it would be adorable if Onion were to run with the idea of his new Steven-related mouse friend and create a (probably) benign army of Beach City’s rodents. But maybe that’s just me.

Thursday’s episode will be bringing us back to Jamie, and I can’t deny that I’m hoping his play will give us a little more insight into the Gem influence on Beach City’s history. Hope to see you there!

Vrai is a queer author and pop culture blogger; they were unaware that the Crewniverse was chronicling their family’s summertime motel stays so closely, but are glad it helped. You can read more essays and find out about their fiction at Fashionable Tinfoil Accessories, support their work via Patreon or PayPal, or remind them of the existence of Tweets.