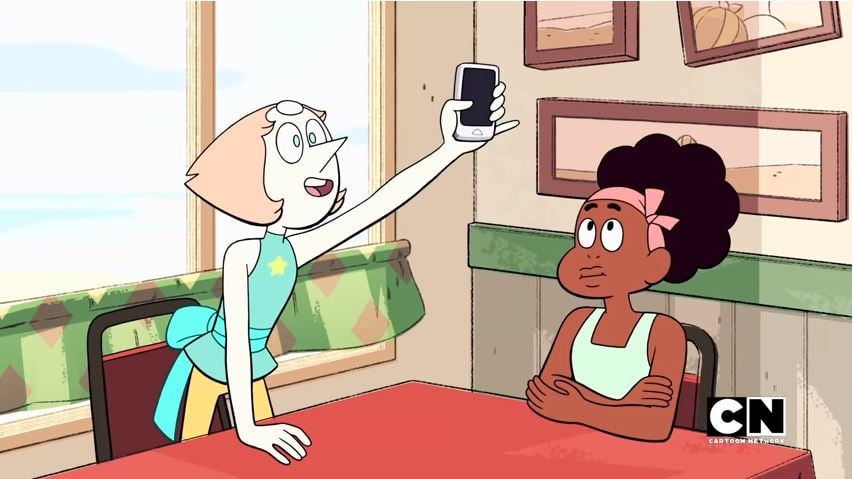 The Recap: Steven writes a letter to Lars, filling him in on what’s going on in Beach City—Ronaldo is still obnoxious, Jamie is leading improv, Nanefua is working on community safety plans, and Dewey is looking for purpose.

Well, all of those one-off jokes and loose ends had to go somewhere. It’s kind of a shame that it’s the cap to a long-awaited spate of new episodes, though. (Allegedly, we’ll be getting more new episodes as soon as May, but I’ll believe it when I see it).

Unfortunately, whether because of the utterly broken airing schedule or the season pacing itself, the character balance of this episode winds up feeling off. In the last episode, I bemoaned the relative lack of focus on Amethyst, Pearl, and Peridot, and they do show up here … but only for a few (admittedly good) jokes.

Meanwhile, Ronaldo. Were you wondering whether Ronaldo is still agonizingly irritating and self-absorbed? Good news, you’ll have as much as a quarter of the episode to confirm that hypothesis. Any initial hope that he might have grown up enough to be legitimately concerned for Lars’ safety goes immediately out the window, and his screentime goes nowhere except for the vague threat that he’ll have the opportunity to screw up being the town’s lookout in the future.

There are definitely shows that can pull off having a recurring unlikable character, but they generally involve bringing them out just to have horrible things happen to them (and if you miscalculate, you wind up with a generation that vastly prefers Team Rocket to Ash). Steven Universe is just too nice of a show to pull off that sort of joke, and the result is that an obnoxious character is stuck in a framework that really wants to encourage us to have empathy for him. And I just … don’t at this point. With Cartoon Network constantly jerking the show around and leaving its future perpetually uncertain, I’d much rather spend whatever time remains with likable characters.

With ex-Mayor Dewey, there’s at least a sense of logic behind focusing on him. As with Garnet in “Pool Hopping,” Dewey’s story is exploring how to readjust as the world seemingly moves on without him. And there’s undeniable value in that, given that Nanefua’s election is a not-really-veiled-at-all metaphor for the push for more diverse voices and collective responsibility in society.

Touching on Dewey’s anxiety and sadness, before ultimately giving him a new job at the Big Donut, is a gentle, kind way to explore the fact that saying “maybe not all positions of power should belong to straight white men” isn’t the same as saying “we want straight white men eradicated.” There’s still absolutely a use for Dewey’s skills, and he becomes a part of that community tapestry and is valued and loved. It’s nice and understated, though all the more baffling when put in tandem with the show’s embodiment of conspiratorial MRA nonsense—and not in a way that purposefully contrasts them, but in a way that just kind of … exists.

Still, while the choice of storyline might make sense, it doesn’t change the fact that it’s by far the least interesting part of the ensemble during this eleven minutes. Meanwhile, Pearl is learning how to use a cell phone; Mr. Smiley, Sadie’s mom, Peridot and Amethyst are apparently doing weekly improv shows and I would like to follow that forever; and Greg and Garnet are two tennis games away from having a discussion about the bourgeoisie.

All of these are tidbits for a reason, but they serve as a reminder of all the great characters we aren’t spending time with. (By contrast, Sadie’s cameo feels less painful because she just had a whole episode.) This is an issue that these recaps keep banging their heads against: the show’s ensemble cast is a great strength, but at a certain point there has to be a narrowing focus as all your big mysteries start to come to a head. When is this show ending? Is there actually going to be a big second rebellion? Is empathy going to save the day, or is the message that sometimes fighting is inevitable? We just don’t know! And it kind of feels like we should at this point, at least a bit.

Still, this wasn’t a bad run of episodes. There was thematic meat to most of them, and as always, the Beach City episodes were thematically connected to where the show’s trying to go. But good lord, this release schedule is killing me by degrees. Fingers crossed for May, y’all.

And Cartoon Network, stop marketing ALL THE ANSWERS when that’s actually nowhere close to happening. For fuck’s sake.