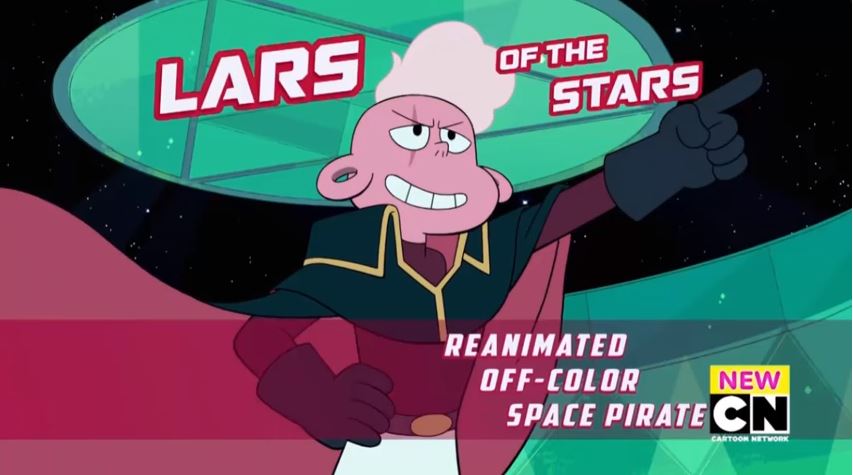 The Recap: Steven and Connie go into space to take Lars a care package and discover that Lars and the other misfit gems have been busy—namely, stealing a space ship and having daring escapes from an Emerald. Steven and Connie manage to save the ship as Stevonnie but are shot down and stranded on a nearby planet. While they wait for rescue, they have dreams seemingly drawn from Pink Diamond’s memories.

Here we are, back again. For those who caught the last round of new episodes on television it’s only been a week; for those who caught wind of Cartoon Network’s bizarre app-related marketing, it’s been more like two months. Which is downright lightning speed compared to the seven-month wait that came before that. Dare we hold out hope that the good ship SU, inspired by that other recent show about sentient rocks, will actually benefit from consistent scheduling going forward?

We daren’t, but at this point I am as dedicated to pointing out this baffling marketing strategy as Jim Sterling is to dragging Konami.

But that’s not why any of us are here. This is an event, meaning that the double episode is a chance for us to dig into the mysteries of the series (which this season has been much better about integrating with the breather episodes). Like most of the event airings over the years, this is largely delivered in the back half, with a front episode that’s less weighty and not quite substantive enough to stand on its own.

“Lars of the Stars” isn’t a pure burner episode, but there’s definitely a reason it was packaged as part of a double header. It’s the first time in a while that the Crewniverse has decided to dedicate an entire episode to shenanigans and anime homage; I suppose they saw this as a rare space battle with stakes low enough to be more comedic than dramatic and had a song in their heart for Captain Harlock et al. It leads to a few nice moments (Emerald’s gloating and cute little fanged teeth are choice, as are little touches like giving Lars an ojou laugh), but the episode doesn’t quite gel.

Maybe it’s because this is the first chance we’ve had to see the misfit gems since Lars’ dramatic death, and they’re still each playing exactly one character trait (especially Padparadscha, who has no character interactions at all beyond a joke that’s long since run into the ground). Maybe it’s because part of Lars’ arc is dedicated to turning him briefly back into a selfish jerk in order to make a didactic point and then quickly moving beyond it to the improved character they and we were ready for him to be.

We’ve come to a point where the time we get to spend with these characters is at a premium, and it regrettably winds up feeling like a waste to spend that time on a goofy throwback space battle where the dramatic elements just plain clash with the everything else. The tension’s even obvious in the writing—Laris is both a cool space captain who’s grown a lot and stole his new duds, no big; and an emotionally stunted kid who’s at or regressed from where we saw him last. Those two things could comfortably flow into one another, but there simply isn’t time here to pull it off.

To close on a positive for the first half, I will say that the continued insistent terminology relating to Lars and Sadie as “best friends” despite the obvious romantic tension there is kind of my favorite lowkey shade from a team of queer creators. 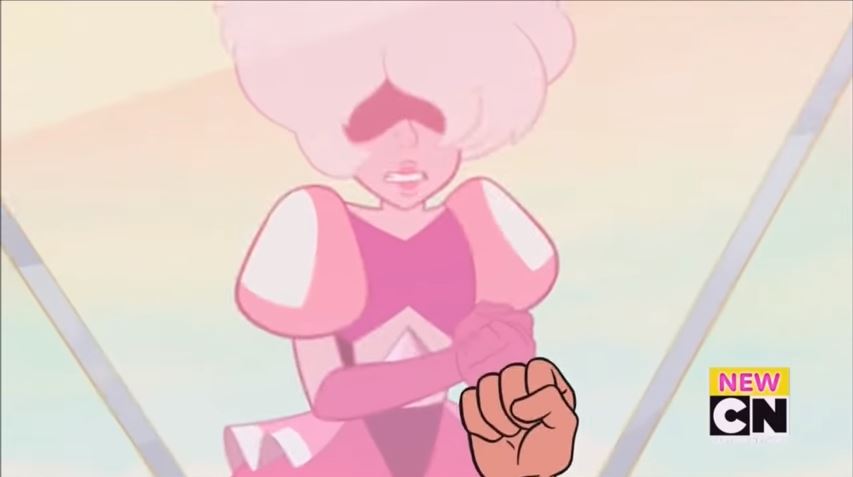 “Jungle Moon,” fortunately, manages to deliver in spades. It’s been a long time since Stevonnie was prominently featured as a character (near the beginning of season 4, almost 18 months ago), but AJ Michalka proves herself capable of carrying almost an entire episode by herself, infusing Stevonnie’s voice with Steven’s compassion and Connie’s pragmatism. There are senses of which character is more prominent, since this is a young and imperfect fusion, while also giving us flashes of who Stevonnie is as their own character. Little touches, like having Stevonnie grow stubble, are also a nice surprise, helping to more clearly convey the fluidity of a character who’s often assumed female by inattentive viewers.

The star of the show, though, is the elusive Pink Diamond. The framing of this episode would seem to finally confirm the theory that Steven and Rose’s gems either are or contain a part of Pink Diamond. The decision to muddle Pink Diamond’s memories with Stevonnie’s makes for fantastic visuals when combined with the freedom of dream logic. Big props to Season Five newcomer Miki Brewster as well as veteran Jeff Liu. The revelation of whose memories we’re watching is clear long before the episode tells us, but the pace is kept engrossing by the chance to see both this new character and Pink Diamond in a new light. It conveys a great deal in a short amount of time, capturing the muddiness of dreams in a way that’s both possible to follow and still unsettling.

That dream sequence, all by itself, is a reminder of why this series is so good when it’s on point. It tells us something about the world, connects that worldbuilding to character progression we’re invested in, and presents all of it in visually innovative ways. It’s damn fine storytelling, and it speaks well of Brewster that she was able to pull off a reveal that’s been so hotly anticipated as her first contribution to the team. It’s nice to have a reminder, as the show approaches its five-year anniversary, that there’s a reason it’s worth coming back to.

Vrai Kaiser is a queer author and pop culture blogger; they can’t believe it has in fact been five years. You can read more essays and find out about their fiction at Fashionable Tinfoil Accessories, listen to them podcasting on Soundcloud, support their work via Patreon or PayPal, or remind them of the existence of Tweets.