Connie is the hero we all wish we could've been. 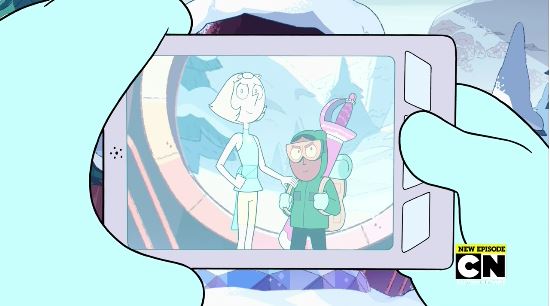 The Recap: Steven and Pearl accompany Connie on her first mission, which is supposed to be a simple retrieval. But things are never simple–one corrupted Gem turns into two, and Jasper is hunting them too.

A few episodes back I mused on how the new writing/boarding team of Howard and Liu would handle more Gem-centric episodes. The answer, as it turns out, is “pretty darn well.” This episode also has some throwback qualities, largely in Pearl’s motherly doting, but it’s in a way that feels smartly comforting rather than regressive. This is Pearl trying to move on, genuinely loving her role as a teacher and the chance to have someone look up to her. There’s still a touch of that anti-human bias as she mentions Connie far outpacing her expectations, but she’s broken expectations just as much as Connie has–if in a different way. The evolution of their mentor-student bond is a beautiful thing I didn’t know I desperately needed, is what I’m saying.

The plot here fits an increasingly familiar mold for the show that has yet to wear out its welcome: beginning with a lighthearted adventure focused on previously underdeveloped character interactions and an underpinning of uneasiness that bursts out into active dread in the last few moments. “Cry for Help” is the other big one (which also had Liu at the helm), though Gem history lessons in general are prone to this tactic (see also “It Could’ve Been Great,” which was also written by…wait a minute…).

This isn’t a critique. While any formula can become tired once it stops making the material feel fresh or the audience grows numb to it (see: multi-camera sitcoms, particularly through the 80s and 90s), a clever writing staff can use familiarity as something to build unfamiliar content or experimental styles off of, or to subvert that familiarity for greater emotional impact. The Crewniverse have proven themselves to be a thoughtful, incisive bunch, and for right now that writing style is working like gangbusters as the story continues to grapple with more and more serious topics.

While Pearl’s caretaking and Steven’s sometimes-incongruous lightheartedness both get chances to shine here, this is really Connie’s outing. She’s coming into her own as a member of the team, working hard as a fighter and researching to try and be the best asset she can to the team–the tree sequence in particular is the fantasy of many a kid who read Jean Craighead George or Greg Paulsen-style survival books growing up–but there’s still a crucial disconnect. She’s cognizant of the threat and the steps she should take, but she’s not emotionally prepared; to her, the threat of Homeworld is as theoretical a threat as the energy crisis, real but distant, while Steven has faced near-death multiple times now.

She’s had plenty of training, but that doesn’t stop Connie from freezing up Shinji Ikari-style when actually put on the battlefield against a real threat. It’s a testament to her strength and future teamwork with Steven that she’s able to pull herself together and call for help, and lucky that her uncertainty had a chance to manifest during a fairly contained encounter.

There’s something quietly sad in how the show portrays the necessity of combat, in Steven trying to reach the corrupted Gem even when he’s pinned down and both kids looking for any other solution before accepting the need to defend themselves; in the fact that a part of Connie’s growth as a fighter means seeing more horrible things and facing danger to her life. But at least the attempt at peace is always there. At least these kids aren’t alone, left to descend into trauma as Pearl, the other Crystal Gems, and the corrupted Gems have. It’s a nuanced nod to a concept that’s somewhat built on combat and yet yearns to find a way around it.

Speaking of fights that are starting to seem inevitable: Jasper. One of the things I failed to cover during our discussion of “Alone at Sea” (I’m starting to think I could take a whole second pass at that episode and come up with something entirely new) is the sense that Jasper’s arc could be heading down the road of an addiction metaphor. The show has certainly discussed the addictive elements of fusion in the past, with both Pearl and Amethyst engaging in destructive behavior in order to gain that feeling of wholeness that came from being fused. And those were Gems with support networks.

Meanwhile, Jasper is on her own, unstable, and seemingly planning something, because both the Gems she collected today were variants of Jasper–and we know from “The Answer” that when Ruby fused with other Rubies she felt like a bigger, more powerful version of herself rather than a new being. So there’s a seeming semblance of a plan there, as well as the resurgence of “Jasper the cautious tactician” that we briefly glimpsed back in season one. Seemingly.

I’m throwing around that word with obnoxious frequency because it’s blasted hard to tell what’s going on with her character. The more Jasper appears the clearer it becomes that we know absolutely nothing about her, and the stranger it becomes that show is shutting us out from knowing those things. Even when Peridot was still a villain, Steven spent their interactions reaching out and trying to understand her. But here, not only is Steven afraid, the script itself is shutting us out, obscuring everything from details (how did Jasper get to the North, exactly? Can she use the warps?), to motive (would Jasper have attacked Connie and Steven if Pearl hadn’t shown up, or would she still have left, her behavior in “Alone at Sea” a notable outlier of impulsive violence?), to origin (who was Jasper in the war, anyway? She claims she knew Rose, but neither Pearl nor Garnet seemed to recognize her–what was her place on the battlefield?).

It is a staggering number of blank spots that have to be deliberate; after all, this is the show that spilled Centipeetle’s entire backstory within five minutes of her being able to communicate. The question of when those facts will be deployed and to what end are less clear, though I wonder if we might not be spending the rest of the season finding out.

I’ve been doing my level best to avoid spoilers for this week’s run, so I’m afraid I’ve got nothing to preview for tomorrow beyond the title: “Crack the Whip.” See you there!
Want more stories like this? Become a subscriber and support the site!

Vrai is a queer author and pop culture blogger; they’re happy to see Pearl embracing her status as Favorite Gem. You can read more essays and find out about their fiction at Fashionable Tinfoil Accessories, support their work via Patreon or PayPal, or remind them of the existence of Tweets.