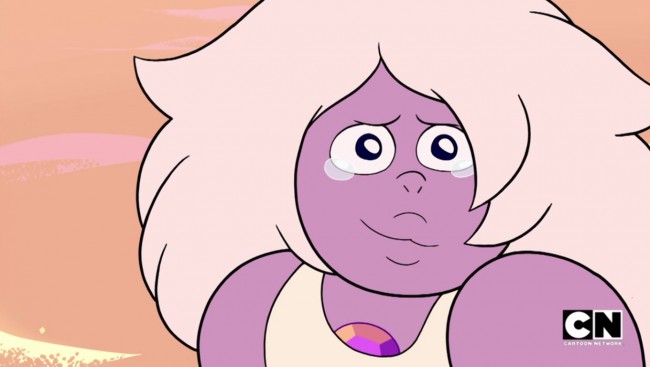 The Recap: Steven tries to cheer Amethyst up by taking her to visit Lapis and Peridot; in turn, Peridot tries to reassure Amethyst about her creation by showing her the substandard Beta Kindergarten where Jasper was formed. But Jasper is already there, using the holes to hold her corrupted army prisoner. While Amethyst can’t take her down, the newly formed Smoky Quartz wins handily, and Jasper breaks down before succumbing to corruption.

I am finding it very difficult to be coherent about this set of episodes. While there’s good stuff in the entire 22 minutes, it’s tempting to jump to those last five or so, which is a carpet bombing of emotional and plot punches. But, just for the sake of formatting, let’s try to go step by step.

The visit to the barn makes for a great opening act. It’s one of the first times we’ve seen life really move on in a meaningful way without Steven around, as Lapis and Peridot have gotten quite close and really invested in their meepmorps and mutual love of Camp Pining Hearts (is it beside the point to call Lapis as Peridot’s first fusion now?). It’s a tantalizing glimpse of something that we’ll doubtlessly be coming back to later (please let Florido and Zuke board all the comedy Peridot episodes, and also what’s up with that bowtie), and it underlines how disturbed Amethyst really is by having her scoff at something she’d normally be really on board with.

There are more facts about the war to be had too, with the revelation of the titular Beta Kindergarten and a little more information about how Jasper was made. It seems that while Amethyst had the more methodical creation (probably before the rebellion began), Jasper came out of the earth flexing and is the biggest, baddest, most perfectly formed Prince of all Saiyans Gem to come out of a disadvantaged environment (which adds a wee bit of a callous bootstrap-pulling undercurrent to Jasper’s later monologue).

Speaking of monologues, there are plenty to go around here. All four major players in “Earthlings” get to make a big speech (Jasper gets two!), and while none fail they definitely run a gamut of effectiveness: this might be one of the few instances where Callison is plainly upstaged by his costars, given a sincere speech to deliver that’s also more or less a reprise of what he’s been saying all along; Peridot gets a chance to show off what she’s learned (showstopper, spotlight stealer, #EmmyforShelby and so on); and I am now genuinely concerned for the state of Kimberly Brooks’ vocal cords after the screaming, growling descent Jasper’s voice took into corruption.

Michaela Dietz had her speech too, but it was in the small moments where she really nailed it–from her voice cracking in frustration to tearfully calling back “Steven vs. Amethyst” to destroying all hope of your recapper’s emotional coherence with that sad, understanding “come here, Sis.” Amethyst is almost always tasked with playing big moments, and yet amid all this sound and fury she really gets to nail down the small beats.

And of course, we have the grand introduction of Smoky Quartz. I’d always been somewhat wary of the possibility of Steven fusing with one of the Crystal Gems, and it took seeing it done right to understand why. Up until he came to this new understanding with Amethyst, Steven’s never really been on even footing with any of his guardians – and the very best fusions are the ones formed between equals. With that emotional milestone cleared, we can welcome Natasha Lyonne’s wonderful performance, not quite as hammy as Sardonyx but still brimming with a sort of performative goofiness that fits both Steven’s love of puns and Amethyst’s cool-older-sibling charm. I love them and am already sad that the guest-actor curse is sure to come up.

Fusion scenes are necessarily short but intense, packing a high-energy punch that has to tell us a lot about a brand new character in a very small window of time. They’re not only a chance to see a new design, new voice, and new toys, but a literal personification of a relationship and its growth. It’s great to see Smoky triumph almost effortlessly as a duo of “worst Gems” after Amethyst was so frustrated by her inability to break Jasper’s defenses. But the episode also knows exactly when to break that moment off, bringing the episode crashing down with Jasper’s fall.

Brooks really brings down the house here, aided by some carefully deployed and expressive close-ups by Molisee and Villeco. Jasper has still done horrible things she needs to atone for, but this episode underlines the tragedy of her experience, walking a thin line of revealing vulnerability that can be mined in the future (probably not for a while, although this is a three-parter so we’ll see) without throwing up its hands and saying she’s just lonely, you guys. It’s implicit, but it’s not an excuse, and there’s something agonizing in seeing the slowly-corrupting Jasper clearly want to reach out but holding onto the toxic pride that’s caused her to embrace Homeworld’s awful ideology and drive away everyone near her.

The final mention of Pink Diamond is almost an afterthought in comparison to all that emotional stuff. It’s a big deal in the sense that the characters are now finally going to have to talk about something the viewers have been zeroing in on for months, but it’s more confirmation than reveal–that Rose is connected to Pink Diamond, and that something bad went down (even the “what” is unclear, since any recollection involving Rose has to be taken with several crates of salt).

The fact that Jasper was fighting for what she perceived as justice for Pink Diamond rather than fighting for its own sake adds an interesting slant, but that’s decidedly tabled for the moment, given the poofing and all (a moment which might be one of the show’s greatest payoffs, and certainly one of the best uses of Peridot in an action scene). But I doubt that arc’s done with – the laws of dramatic irony kicked in the very second Jasper declared she’d never let herself be corrupted by Earth. And a non-Diamond-inflicted corruption seems like pretty solid practice for Steven.

Next time we have the return of the magnificent Ruby squad, and given that the title is “Back to the Moon,” I think we can expect some actual substantive information on what was up with Pink Diamond. See you there!

Correction: An earlier version of this article mistakenly credited Abrams and Mitoff for storyboarding “Earthlings”. The corrupted Gem responsible for the error has been poofed.

Vrai is a queer author and pop culture blogger; they feel weird about the concept of the upcoming “regular” “schedule.” You can read more essays and find out about their fiction at Fashionable Tinfoil Accessories, support their work via Patreon or PayPal, or remind them of the existence of Tweets.