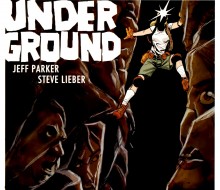 Earlier this week, KISS singer Gene Simmons kicked a proverbial beehive when he threatened to hunt down and print the names and pictures of people who had attacked his website in the midst of an anti-RIAA protest, saying that he’d send their “little butts [to] jail, right next to someone who’s been there for years and is looking for a new girl friend.” The end result: A longer, nastier wave of attacks.

It’s instructive to consider how comic artist Steve Lieber responded when he found out that users on 4chan’s comics board (/co/) were sharing almost the entirety of Underground, the graphic novel that Jeff Parker wrote and Lieber illustrated. After getting the tipoff via Twitter, Lieber dove right into the 4chan thread and began conversing with the forumers. He didn’t berate or threaten anyone, or even use ugly words like “pirate” or “copyright.”

Instead, he answered people’s questions, cracked jokes (when someone said that his last name sounded like Justin Bieber’s, Lieber responded, “It’s true. We dated for a while, but it had to end when I demanded we hyphenate our names, and he insisted that Lieber-Bieber sounded too stupid even for youtube”), and, most incredibly, posted the whole comic for free on his own website. And it seemed to work: While not everyone reading the thread was won over, Lieber evoked a surprisingly positive, enthusiastic response, and by the time the thread ended, many 4chan readers avowed that they’d buy the comic to support the artist.

“I’ve been hanging out with other fans on comics message boards since Usenet in the early ’90s. I didn’t do anything different here. The only ‘secret’ is to talk to people like they’re human beings, and don’t get bent out of shape if someone says something mean. It’s the internet. Someone’s always gonna says something mean,” said Lieber.

As for 4chan’s rep as one of the potentially nastiest sites online? Lieber’s genuinely more interested in engaging its users with poise than being paranoid. After all, criticism is the name of the game in any creative field.

“For me, part of the process of learning to draw was getting some serious criticism from people I respect. No one online is ever gonna tear my stuff apart harder than Joe Kubert did when I was a student. When you’ve had your faults broken down for you by a guy like Joe, the internet doesn’t seem quite as harsh,” said Lieber.

One key point worth noting here is that despite the fearsome, monolith reputation conveyed to 4chan in many quarters, mainly due to the high-profile antics of “random” board /b/, each one of the imageboard site’s individual boards has a distinct vibe. While its liberal attitude towards copyright law might rankle some, /co/ is widely considered one of the nicer boards: According to TVTropes, “/co/ (for western comics and cartoons) is actually QUITE odd in that it defies most of the normal 4chan rules; it is highly popular, yet rather civil, especially for 4chan, and tends to pride itself on being less nasty than the other popular boards (though this varies widely based on who’s actually posting at the time.) The board’s unofficial motto is “/co/ is love.” So while Steve Lieber’s venture into 4chan to address his readers was at once ballsy and shrewd, it wouldn’t have worked on just any terrain.

Lieber acknowledges as much in the comments section on his blog, saying that anyone who looks at this exchange as proof that they can move into 4chan and “build a Starbucks” is woefully mistaken:

FWIW, I don’t think this is likely to be the start of a gentrified 4chan. I was like some guy who stumbled into town with a head injury. The locals patched me up and sent me on my way. Anyone who is dumb enough to look at my visit and think “I can move in and build a Starbucks!” is going to have a very different experience.

At that, the proverbially head-injured Lieber seems to have made the most of the experience. He shares these traffic stats for the Underground website, which show that even the vaunted Boing Boing effect was dwarfed by his post-4chan traffic: 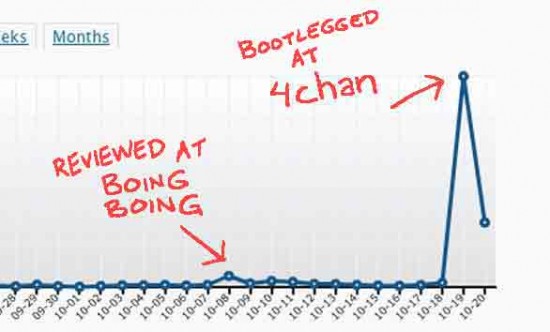 Lieber’s experience is almost certainly not generalizable, and other artists or marketers who tried to pull off similar stunts to self-promote would likely get burned. But there’s still a lesson to be learned from this weird, sublime, organic interaction: The days of creators on pedestals and consumers as groveling groundlings are long over. And creators who can engage their audiences and communicate with them as equals rather than threatening to send their little butts to jail have a much better chance of making a living even as the Internet stirs upheaval in every medium it touches.