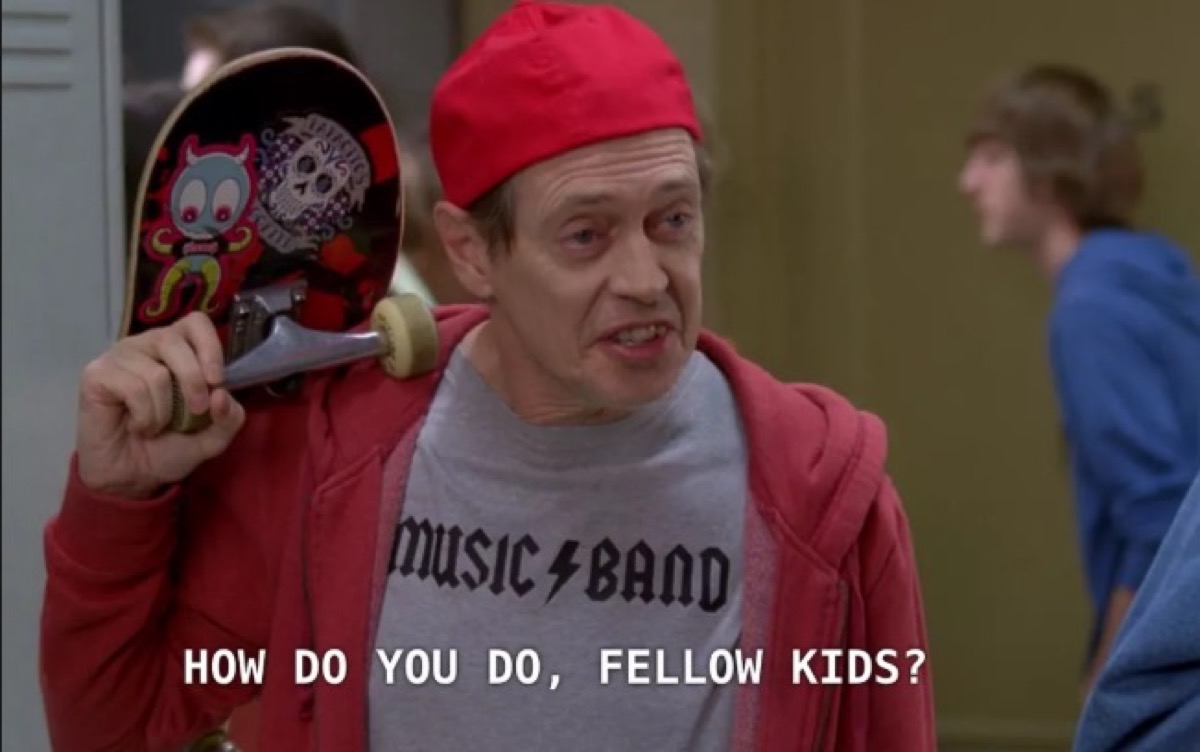 If you haven’t watched 30 Rock, you probably still know about the Steve Buscemi “How do you do, fellow kids?” meme. The iconic actor is dressed up like a “teen” but … still looks like Steve Buscemi did at 51 years old. He’s wearing a shirt that says “music band” with AC/DC’s logo, and he’s holding a skateboard with a backwards hat on. It has become famous online for when you feel a little too old liking something or, more recently, it has been used to make fun of Ben Platt as Evan Hansen in Dear Evan Hansen.

It is a staple of online culture, and now the meme has ascended to a new plane of existence—meaning that Steve Buscemi went to hand out Halloween candy to kids in Park Slope while dressed up like this character, and all the adults taking their kids around decided to get pictures and geek out. Personally, I do hope one, like, 8-year-old recognized him and got excited, mainly because I would have been an 8-year-old who got excited about Steve Buscemi because I used to love The Wedding Singer and Billy Madison.

Park Slope had the best Halloween

Now, I miss trick-or-treating. I feel like I’m too old, and since I do not have kids, it’d just be me walking around and trying to get some candy. But now I regret not going trick-or-treating so that I could have seen Steve Buscemi out in the wild. Skateboard and all, Buscemi sat outside on his stoop and handed out candy all night long. That’s all and yet he won Halloween this year.

The pictures rule because it’s just Steve Buscemi out there living his best life and adults having the best time with it.

Steve Buscemi wins Halloween giving out candy in Brooklyn dressed as his epic GIF….”How do you do, fellow kids”

Elvis Costello and Steve Buscemi giving the kids candy and indulging the adults in our neighborhood Halloween crawl. pic.twitter.com/yAB2626kiu

I hope that when kids came up and got their candy, he said, “How do you do, fellow kids?” before handing them out their candy, because that would just be the icing on the cake. Make the meme come full circle, Steve.

So, in the grand scheme of Halloween 2021, Steve Buscemi has won.