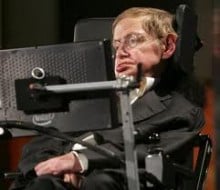 Physicist and bestselling author Stephen Hawking may believe in extraterrestrial intelligence and the theoretical possibility of time travel, but for him, the notion of life after death is a fiction too fanciful to accept.

In a recent interview with The Guardian, Hawking referred to heaven as a “fairy story” and spoke in support of a humanist ethic that emphasizes making the most of our time on Earth rather than the promise of a hereafter.

I have lived with the prospect of an early death for the last 49 years. I’m not afraid of death, but I’m in no hurry to die. I have so much I want to do first… I regard the brain as a computer which will stop working when its components fail. There is no heaven or afterlife for broken down computers; that is a fairy story for people afraid of the dark.

In the interview, Hawking also lobbed this profound mindbender: “Science predicts that many different kinds of universe will be spontaneously created out of nothing. It is a matter of chance which we are in.”