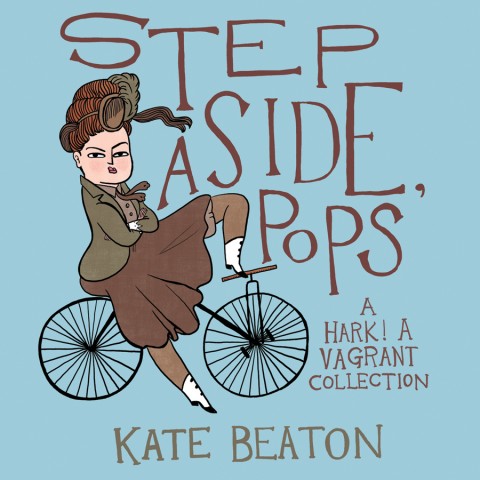 When you’re reading, how do you laugh? When something on the page or screen tickles your funny bone, do you guffaw aloud? Do you chuckle under your breath? Does your laughter echo in your head, but to the rest of the world you remain serenely bookish?

That’s me, that last one. I’m rarely comfortable with letting the general public know I’m experiencing emotion of any kind. I might grin and stifle a giggle, deluding myself into thinking that it’s just between me and the book, but I rarely laugh out loud.

Kate Beaton, darn her, caused inadvertent laughter to actually escape my throat. It startled my wife into asking what was wrong—fortunately, nothing more than that there was something hilarious on the page. I immediately turned the book around and said, “This! Read this!” (impossibly, from across the room).

And that is my story about reading Step Aside, Pops: A Hark! A Vagrant Collection. You, should you choose to embark upon a similar journey, are now forewarned. Kate Beaton’s latest collection will almost certainly make you grin. Or chuckle, chortle, or snicker, most likely.

I mean, just read this, one in a series of comics riffing on antique postcards:

To be honest, I didn’t know about Kate Beaton until a review copy arrived at my doorstep a while back. I don’t usually read humor comics—I dunno, probably because of my aversion to laughing out loud. No, not really; I just got burned out on them thanks to reading too many collections of The Far Side as a kid.

But Beaton? Wow. I’ve been missing out. What really gets me is her combination of great timing, nuanced expressions, and an amazing range of topics.

Let’s start with the timing and nuanced expression. Her linework is loose, scratchy, and irreverent—all the better to startle you with its subtlety. With just a few sparse strokes, Beaton can shift a character’s expression from bored to annoyed or from suspicious to speechless. All of this plays into the timing of her jokes.

Most, but not all, of the strips in Step Aside, Pops are composed of three panels, and she uses that one-two-three beat in a manner akin to the pun dog—but even better, because you’re laughing before you even realize the excoriating depth of her humor. Sure, some are relatively light. For instance, what would happen if Alexander Pushkin’s favorite feline was in a cat show? Others, however, point out how shallow adoration can be.

She’s a cultural magpie, picking on everyone and anyone—fictional, historic, contemporary, sacred, beloved, abhorred, whatever. She clearly has an appetite for, well, everything, and once something captures her curiosity, she picks it up, turns it about, examines it thoroughly, and then lays it out on the page and pokes at it.

Take classical literature. I mean, why not riff on the rivalry between Austin fans and Brontë fans? 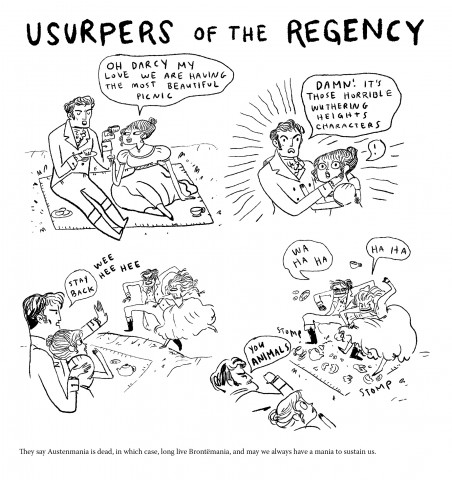 Of course, she does so with a progressive, feminist edge. Which I happen to love.

You can get the same effect from her website, if you’re the web-reading kind. But me, I like holding books. And looking at books. And storing books in the magazine rack in the bathroom. What? Don’t look askance. Let’s be frank: all “coffee table” books meant for leisurely browsing should actually be stored in your bathroom. Guests don’t really read the strategically placed books in your living room while you’re away preparing teatime snacks or whatnot … do they? No, they don’t.

Therefore, here’s my overall take: Step Aside, Pops deserves pride of place next to your toilet atop old copies of The New Yorker.

(images via Drawn and Quarterly)

Amanda M. Vail is a writer, editor, and consumer of as many comics as possible. In addition to running her business, Three Wrens, she’s a staff writer for Women Write About Comics. Follow her musings on Twitter @amandamvail.