7 New Actors Join Disney’s Maleficent, One Is Rita Skeeter, Another Is Dolores Umbridge 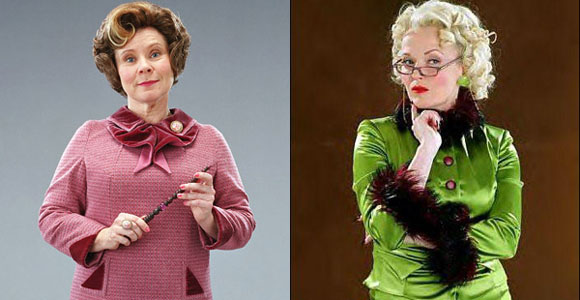 All we needed in a Maleficent film was for Angelina Jolie to play the evil queen. We got that, so everything else after is just candy. Well, the new casting announcements make it feel like Halloween! Six new cast members have been added to the Disney production, among them Imelda Staunton and Miranda Richardson. Yup, Dolores Umbridge and Rita Skeeter from Harry Potter! Can you guess who they’ll be playing?

We already know that Elle Fanning will be playing Princess Aurora in the film but what about all of our other favorite characters? The role of Aurora’s father, King Stefan, has recently be handed to District 9’s Sharlto Copley. You may also remember he played Murdock in The A-Team movie.

/Film writes, “Interestingly, the latest story from THR expands upon Stefan’s background by describing him as ‘the half-human, half-fairy bastard son of the human king.’ Said human king, who tries to take over the fairy kingdom, will be played by [Kenneth] Cranham.”

India Eisley from ABC Family’s The Secret Life of the American Teenager, is set to play a younger version of Maleficent in the beginning of the film and actor Sam Riley will play her right-hand-man of sorts, Diaval, when she’s grown up. I saw of sorts because /Film reports he’ll actually be a raven who can take human form.

Seriously, this movie just keeps getting better and better.

Staunton and fellow British actress Lesley Manville will be playing two of Aurora’s three protective fairies! I know, picturing Umbridge as a fairy is kind of hilarious. Their names will be Knotgrass and Flittle.

And what about Ms. Rita Skeeter?

“Over in fairy land, Richardson is set for the part of Queen Ulla, who has a less than peachy relationship with her niece Maleficent,” writes /Film.

Shooting is set to begin next month with a release date set for March 14, 2014. Is there some way to pre-order my ticket now?