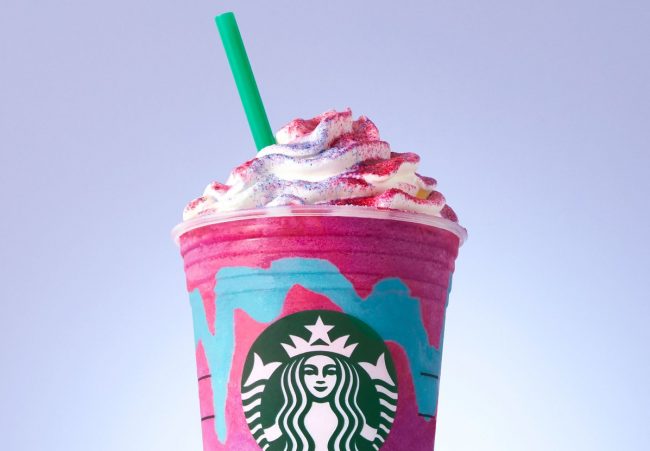 Capitalizing on what the BBC calls “an internet craze for unicorn food,” Starbucks has whipped up a unicorn-themed drink using its signature frap base. How, exactly, does a drink become unicorn-themed? Read on.

The special limited edition unicorn frap is only available in the U.S., Mexico and Canada through the end of this week, so eat our magic dust, other continents! What’s the mystical mixture made of? No one knows. Like the rest of Starbucks frappuccino concoctions, that’s a trade secret and best left unpondered. But here’s how the company described it:

“… a sweet dusting of pink powder, blended into a creme Frappuccino with mango syrup and layered with a pleasantly sour blue drizzle. It is finished with vanilla whipped cream and a sprinkle of sweet pink and sour blue powder topping.”

Yum! Mango syrup and a pleasant sour blue drizzle? Where do I go to plunk down a lot of money for this thing? Oh, wait, I live in New York City; I could go to literally every other block. Oh wait, again! There’s more description from Starbucks. They really doubled down on the wizardry.

“Like its mythical namesake, the Unicorn Frappuccino blended crème comes with a bit of magic, starting as a purple beverage with swirls of blue and a first taste that is sweet and fruity. But give it a stir and its color changes to pink, and the flavor evolves to tangy and tart. The more swirl, the more the beverage’s color and flavors transform.”

Working @ Starbucks means I get to make all the promo signs #unicornfrappuccino pic.twitter.com/AwdKnNpi4c

I admit I’m a simple coffee soul who considers an iced latte as my most adventurous order, but this just sounds … colorful? I’m going to go with colorful. And complicated. Really complicated. I’m already feeling bad for baristas everywhere who have to add syrup, drizzle, whipped cream, and powder toppings to the regular frappuccino. Per the BBC, “a ‘tall’ Unicorn Frappuccino with whole milk has 280 calories, 11 grammes of fat, and 39 grammes of sugar.” It sounds better and classier when you spell it “grammes.” Bless the British.

I was curious whether there really is a widespread “internet craze” concerning edible unicorns, so I asked Amanda Brennan, a wonderful person who has an actual library science degree in memes, about the trend. Amanda pointed me to FB videos and “staged Instagram pics” as contributing to our online hunger for unicorns and also wanting to eat them, like so:

We are so glad everyone is so excited for these mystical unicorn Macs! They are coming out Friday! First come first serve!

I think I get it now. I don’t even like macarons and yet I’m filled with the mad desire to possess these cookies.

Anyway, the Internet predictably had Things to Say about the Unicorn frap. Some were concerned about all those colorful dyes (natural? not? migraine-inducing?). But others are all in on the creature coffee concept.

I finally have my hands on this magical, vibrant, and fruity #unicornfrappuccino !!! It even matches my stuffed unicorn ✨ pic.twitter.com/K810QX5Bf2

The #unicornfrappuccino is EVERYTHING I thought it would be. It’s fruity, magically flamboyant, and SO ME!!!! @Starbucks @frappuccino pic.twitter.com/KFxP2nwyO1

A lot of the reactions in the #unicornfrappuccino hashtag are adorable—people seem to really love and identify with our mythical medieval horned horsey friends, and if this drink brings them joy, I’m glad. You do you, unicorns! But don’t forget, those precious, notoriously shy creatures are rare:

If you buy a #unicornfrappuccino, you will destroy the already depleted population of unicorns. I hope you’re happy.

(via the BBC, image: Starbucks)