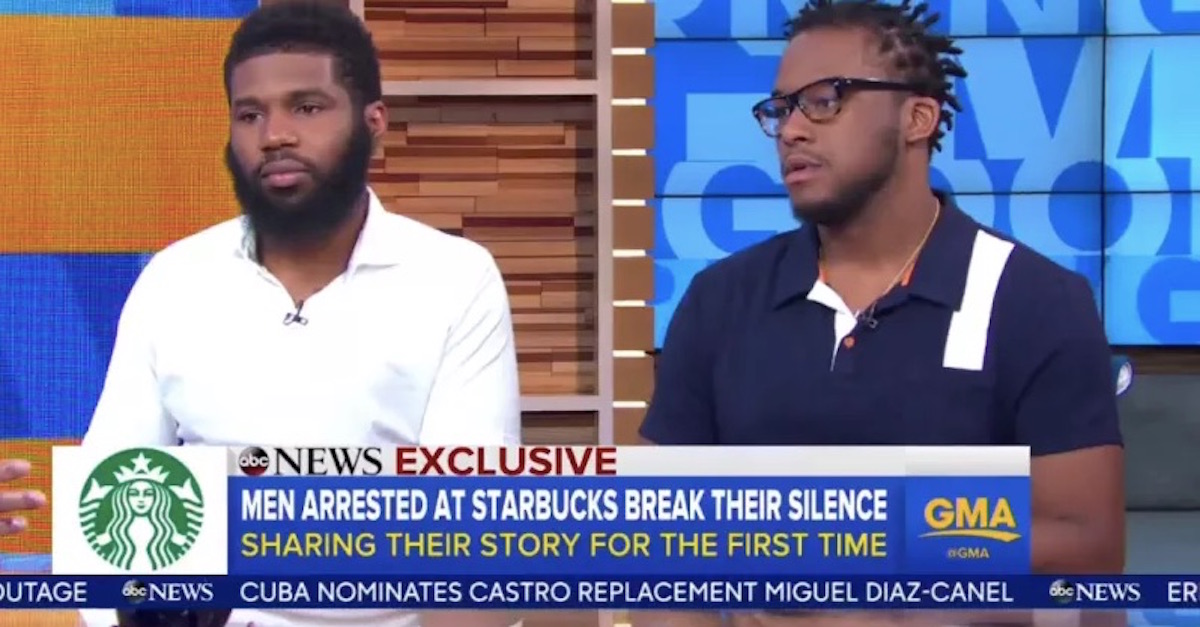 Two men who were arrested while waiting in a Philadelphia Starbucks and touched off a media firestorm have chosen not to pursue a lengthy trial.

Donte Robinson and Rashon Nelson made the choice not to sue for a prolonged court case—rather, in the words of Philadelphia Mayor Jim Kenney, they worked with the city as partners “to make something positive come of this.”

In addition to the symbolic dollar, Robinson and Nelson asked the city to create a $200,000 grant program for high school students who aspire to entrepreneurship. They plan to remain actively involved in establishing the committee that awards the grant money in the future.

Early in April, Robinson and Nelson were waiting for an associate to arrive to begin a business meeting at Starbucks. The manager of the cafe called the police, reporting that “two gentlemen in my cafe that are refusing to make a purchase or leave,” and when the police arrived they arrested the men without reading them their rights or giving a reason for arrest. Fellow cafe-goers recorded the arrest, with several vocally arguing that the men had done nothing wrong.

The incident set off an explosion of social media reaction, mainstream media coverage, boycotts and protests at Starbucks, and eventually led to the company’s decision to close 8,000 stores at the end of May for racial bias training. It was also announced today that Robinson and Nelson have reached a settlement with Starbucks for an undisclosed amount.

The coffee company was no doubt in a hurry to try and put this incident behind them. Robinson and Nelson’s move to not take legal action against the city is in line with their desire to generate positive social change from what happened According to The Washington Post, this was obviously on the minds of the city authorities as well:

“This was an incident that evoked a lot of pain in our city, pain that would’ve resurfaced over and over again in protracted litigation, which presents significant legal risks and high financial and emotional costs for everyone involved,” Philadelphia Mayor Jim Kenney said in a statement.

The Post further reports that the city has invited the two men and their legal team to “to submit thoughts and recommendations to the City Solicitor on other ways of promoting equality in public places, including restaurants and retail establishments.” Hopefully, the attention and awareness this generated and the changes made in the wake of this awful event will help ensure that something similar does not happen in the future. Even so, it should never have happened in the first place.