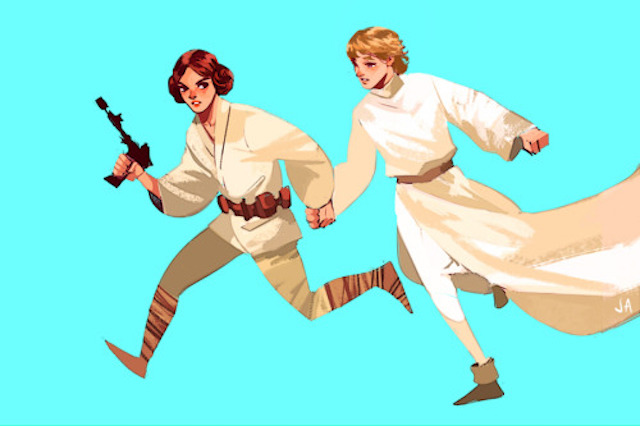 “I’m Leia Skywalker. I’m here to rescue you!” (from this post)

What would the original Star Wars universe look like if Luke were raised on Alderaan as a Prince, and Leia brought to Tatooine, then trained as a Jedi?

On Tumblr, comic artist and game designer Jen, a.k.a. lazy-afternooner, has provided a stunning alternate Star Wars universe I never knew I needed until I saw her art. I’m thrilled she gave me permission to share these far, far away visions with you all.

Jen’s “role swap” universe started back in June of 2016 with the featured image above, but in October, she published a picture titled “Jedi Leia and Prince Luke“: The drawing racked up 40,000+ likes and reblogs on Tumblr, and for good reason. Not only is it beautifully done, but it fits with our desire to see women in more traditional action roles—and to let men occupy equally less-explored spaces. Men can be royal and in need of a rescue, too.

Jen continued drawing her extraordinary swaps, showing well-known Star Wars scenes—only with Luke and Leia flipped. They are most wonderful: 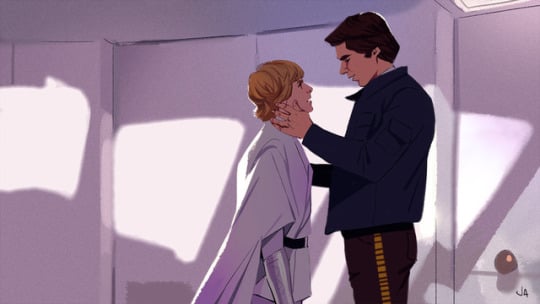 Prince Luke not taking any of Han Solo’s stuck-up scruffy swagger while Han relentless flirts with him? Badass Leia clashing with Vader in the Cloud City before he reveals himself as her father? I would pay a lot of money to watch this version of The Empire Strikes Back. Like, a lot.

Never understood how badly you desired to see a confidently black-clad badass Jedi Leia with lightsaber in hand, ready to confront some Sith Lords? Well, now you do. 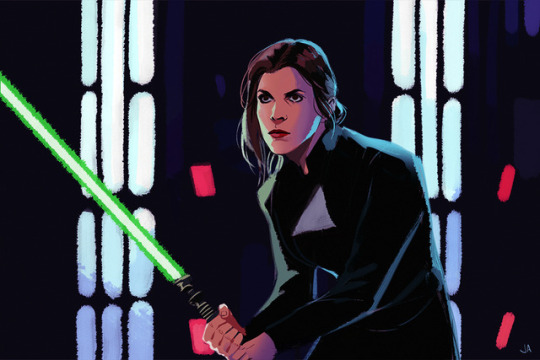 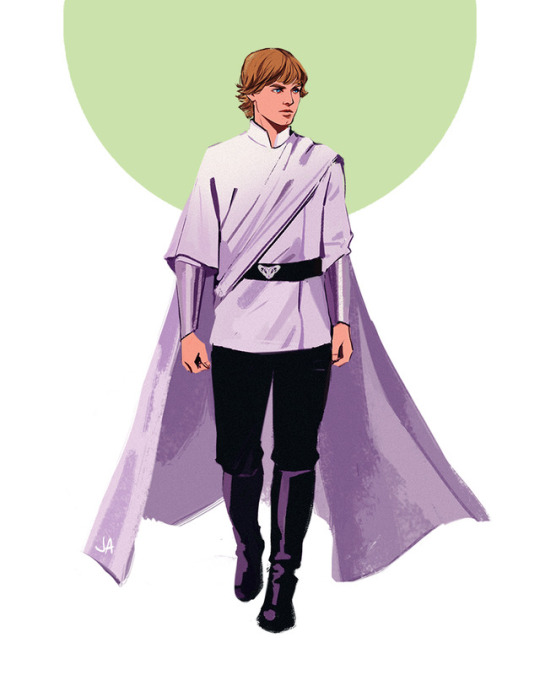 I’m in love with the possibilities of this reverse Star Wars, and I hope that Jen graces us with many more pictures. Check out her Society6 shop, where you should consider buying prints of her delightful art—including the hugely popular “1980s” original trio. And you can follow Jen’s work at lazy-afternooner on Tumblr and on Instagram, so that you’ll be the first to see her lovely versions of the Star Wars, which I will happily dream are canon.