Things We Saw Today: Long-Awaited Star Trek: DS9 Documentary Will Arrive in Theaters For One Night in May

DS9 fans, it’s time to set our calendar reminders on May. What We Left Behind: Looking Back at Star Trek: Deep Space Nine is finally approaching, but we could only have one chance to catch it on the big screen.

The trailer above has me screaming at the tantalizing looks it seems we’ll be getting into the drama both on the screen and behind it. “This is Rashomon,” declares Armin Shimerman (Quark). “Everyone has a different point of view.”

May 13, 2019 is the date to be marked with bold red ink in your appointment book. Fathom Events is bringing What We Left Behind to theaters across America for the evening. A special taped roundtable will follow the feature presentation, with directors Ira Steven Behr, David Zappone, and producers taking a “comprehensive look at the making of the film, the show’s fans and the series’ ongoing appeal to Trekkers of all age.” While supplies last, there may be special posters to bring home to hang beside your Odo pin-up.

The film presents a fascinating in-depth look at the past, present and future of a series whose dark, edgy take on Gene Roddenberry’s vision was often misunderstood when it premiered but has grown into a beloved mainstay in the Star Trek franchise.

Featuring extensive new interviews with the cast and crew of Star Trek: Deep Space Nine as well as newly remastered HD footage from the television series, “What We Left Behind” also focuses on the original writers of the series as they craft a brand-new episode of Star Trek: Deep Space Nine, developing what would be the eighth-season premiere if the show were to return to the air today.

I’ve been waiting for this to arrive for a long, long time. See you May 13th. I’ll be the one yelling about Jadzia Dax.

Tickets for “What We Left Behind: Looking Back at Star Trek: Deep Space Nine” can be purchased beginning Friday, April 12 at www.FathomEvents.com and participating theater box offices.

What else have we gazed upon today? So glad you asked:

What you see today, my Trills and Tribbles? 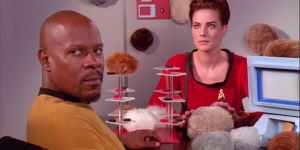