Squirrel Girl Television Series Reportedly in Search of a Network, Our Dreams Are Coming True

#TeamShannon. There, I said it. 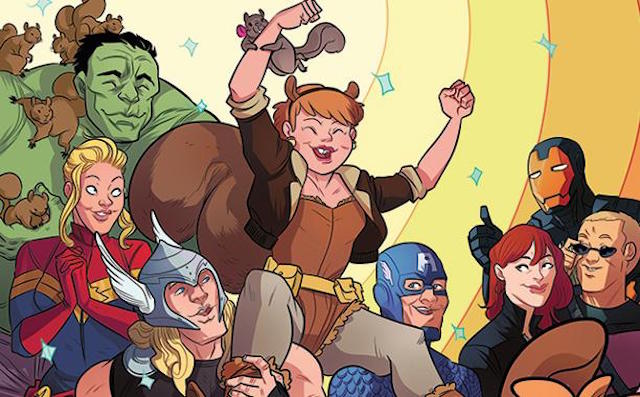 It seems our wishes, hopes, and dreams of more Squirrel Girl entertainment are coming true. According to a report from TV Line, Marvel’s currently in the market for a network on which they can place a comedy series based on New Warriors, with Squirrel Girl spearheading the young Avengers-like group. If this proves true, then Marvel stands poised to take over a hefty chunk of prime television real estate, what with the forthcoming Luke Cage, Iron Fist, Punisher, and Defenders series coming to Netflix and The Runaways coming to Hulu. Plus, consider the additional seasons for their already proven hit shows such as Daredevil, Jessica Jones, and Agents of S.H.I.E.L.D.

While Marvel has definitely found a home in Netflix, it’s perhaps unlikely that New Warriors would end up on the streaming service. As Netflix’s COO Ted Sarandos explained when asked why they passed on picking up Agent Carter, they’re not too interested in bringing in more Marvel properties. It’s likely that Doreen Green might end up keeping the Runaways company over on Hulu, and to be honest, that might not be the worst thing. It’s not hard to imagine that they’ll be similar in tone, though (hopefully) very distinct from each other in more than a few ways.

Obviously, as these are insider reports, we don’t know who might be taking on the unbeatable role, but as we’ve been buzzing (or is it chittering) about for the past month, there are two current fan-favorites who have expressed interest. First to break the silence was Anna Kendrick, who said that her brother turned her on to the character by giving her a Squirrel Girl comic. Kendrick’s backed by both Edgar Wright and the Russo Brothers, who’ve all stated that they support her for the role.

While Kendrick would undoubtedly do great justice to the role, much of the internet has banded together behind Shannon Purser, who captured fans’ hearts on Stranger Things. She tweeted about the role, and once the internet saw, it all just took off from there. She then doubled down on her interest in a chat with Revelist, and thus it seemed that Squirrel Girl hype had reached a fever pitch.

Given that Purser was recently cast as Ethel Muggs in The CW’s Riverdale, she may have a busy schedule for some of the foreseeable future. But, as the casting news also states, her character will be around for a few episodes, and not likely the entire run of the season. That’s okay, because wow would you look at that suddenly Purser’s got a big ol’ open schedule maybe kinda sorta please can you just cast her already she’s perfect oh geez.

We’ll keep our eye out for any news regarding New Warriors, and you better believe we’re already super stoked about this.

(via CBR, image via Marvel Comics)