This “Spooky” Comet Will Haunt Your Dreams

Tonight, we’re actually scheduled to have our very own space fly-by—though it’s not a Halloween asteroid, like scientists initially thought.

No, according to new information, it’s not an asteroid that will be passing over Earth on Halloween. It’s a dead comet (dead meaning that it has already “shed its volatiles after numerous passes around the sun”), and on the latest radar images obtained of this comet, one chilling realization can be made—this thing looks like a human skull!

NASA revealed this lovely image for the rest of us to study, originally collected by the Arecibo Observatory in Puerto Rico. I can only suspect they want to give us all nightmares tonight after we look at it. 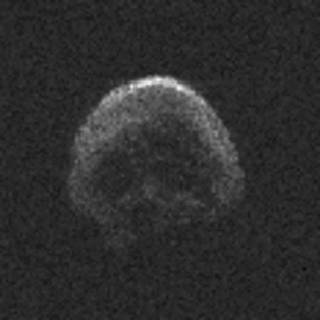 “The IRTF data may indicate that the object might be a dead comet, but in the Arecibo images it appears to have donned a skull costume for its Halloween flyby,” said Kelly Fast, IRTF program scientist at NASA.

The dead comet, which had coincidentally been dubbed “Spooky”, is scheduled to fly by at a very safe distance from Earth at around 1 PM EST—but if you really want to know how you can observe the event for yourself depending on your location, there’s a helpful guide to translate that to your timezone here.