Spider Recon Robots are an Abomination, but Potentially Life-Saving 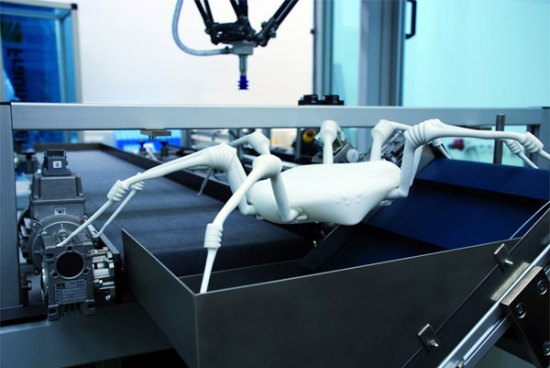 The Fraunhofer Institute, a German applied research company, has recently been working on some horrid little spider recon robots that could have some very useful applications in emergency situations. During emergencies that involve dangerous contamination, such remote controlled robots could prove very useful in exploring hazardous areas and providing valuable information to first responders. Granted, they look positively horrifying, but there are actually some very good reasons that they’re built like spiders, better reasons than “because it’s all sci-fi and creepy.”

One of the main concerns is stability. If you were to get these kind of robots inside, say, an irradiated nuclear power plant, the last thing you want them to do is start getting knocked over, because if someone needs to go in there to set them straight, you’ve accomplished nothing. Having 8 legs means that, like normal spiders, these robots can keep four on the ground at all times. As a bonus, the legs let the robot’s gross little disc-shaped body sit close to the ground, so it has a low center of gravity, and a centrally located one to boot. All that gives them a good way to carry extra equipment, like scanners and the like, without getting thrown off balance.

The legs are powered by hydraulics, so there’s no need for any sort of artificial musculature. Instead, the bots build up internal pressure that they use to pump fluid into the legs, which makes them extend. This, in combination with the spider shape, give the little dudes a lot of mobility. Apparently, some models can even jump. It makes me cringe.

Probably the best thing about these guys is that they’re relatively cheap. The institute doesn’t talk specifics, but they did say that these bots are cheap enough to be considered disposable. Like a rubber glove. Their words, not mine. On the plus side, I guess that means that you can get rid of the awful things when your done with them, and just get a new batch commissioned when you need them next instead of having a platoon skittering around, or sitting dormant in a closet where you half expect them to just start skittering around on their own accord.

Granted, this is an important — and sort of cool — advancement in the field of cheap, small, mobile and disposable recon robotics, but I think I’d rather just hang out in a hazardous contamination zone than have to watch any of these things walk around anywhere near me. Also, those little eyes on the front? They have a purpose too: To give me nightmares.

(The Fraunhofer Institute via Technabob)

Relevant to your interest in things that give me the willies