Aquatic Spider Uses Web As A Gill to Breathe Underwater 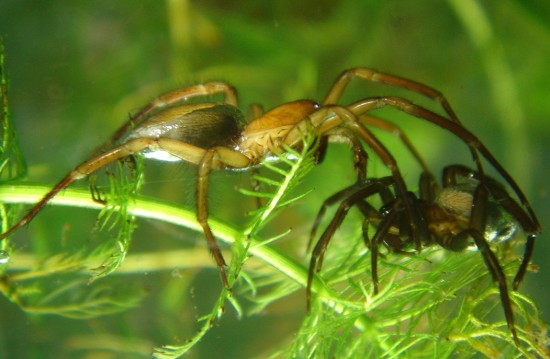 The diving bell spider (Argyroneta aquatica) spends its life underwater. This arachnid needs air to breathe, and has devised an ingenious system by which is takes air from the surface and stores it underwater. The ability of these spiders to breathe underwater was first recognized over 250 years ago. But a new paper in the Journal of Experimental Biology describes in previously unknown detail the means by which Argyroneta aquatica accomplishes this feat.

Air from the surface of water is collected by the diving bell spider using the fine hairs on its abdomen. The air is trapped in a bubble, a bell-shaped web constructed by the spider underwater that it can then carry around with it. Though researchers have long known about the spider’s air balloon, until now it was a mystery how the spider could stay underwater for long periods of time without having to return to the surface to refill the tiny bubble with air.

Researchers Roger Seymour of the University of Adelaide in South Africa and Stefan Hetz of Humboldt University in Germany have discovered that the diving bell spider uses its web as a gill, so it can live underwater with only occasional visits to the surface.

The researchers took 12 spiders and placed them in individual enclosures so they could measure the oxygen levels within the spiders’ air bubbles and the level of oxygen in the water outside the bubble. The tips of optical fibers were coated in an oxygen-sensitive dye which was used to indicate how much oxygen was present. The results showed that oxygen was diffusing from the surrounding water into the air bubble, and that carbon dioxide was being released into the water, thus replenishing the spiders air supply.

The silken fibers of the web used to enclose the air bubble act as an external gill, allowing oxygen from the water in and carbon dioxide out. Based on the rate of oxygen diffusion observed by the researchers, they believe that as much as 70% of the spiders’ oxygen supply comes through the web. Because the researchers never witnessed the spiders replenishing their air supply, they have suggested that the spiders can survive underwater for over 24 hours using their web-gill breathing system.

Eventually though, nitrogen will burst the spiders’ bubble. Or, at least cause it to collapse in on itself.  As oxygen levels go down, the amount of nitrogen in the bubble increases. When the nitrogen diffuses out into the water the bubble can not sustain itself and it will collapse.

Despite having the go back to the surface to occasionally refill the air bubble, the researchers say that the spider’s ability to use its web as a gill is extremely advantageous. The longer it can stay underwater, the better it can hide itself from predators.