First Photos from Spider-Man: Turn Off The Dark 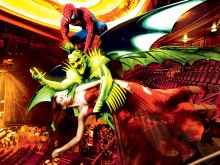 By all accounts, Spider-Man: Turn Off The Dark, the $60 million Spider-Man musical that recently announced it would open three weeks later than planned and yet seems even farther from ready than that, is a troubled production.

As the New York Times recently smacked it down, simply listing facts, “The two-dozen flying sequences are being worked out and still require safety approval from the state Department of Labor. The music, marking the Broadway debut of the U2 frontmen, still isn’t synchronized with special effects, plot and dialogue. Scene-to-scene transitions, essential for rhythm and safety, aren’t complete. Two actors have been injured hurtling through acrobatic rehearsal sequences.”

But hey, there are some first-look photos of the musical in Vogue now, with Mary Jane wearing “gowns by Alexander McQueen, Marchesa or Dior Haute Couture.” As we all know, Vogue magazine and expensive designer gowns are guaranteed magnets for geek males, so it sounds like the Spider-Man musical is going to do just A-OK after all.