Less Than One Week Until Spider-Man: Turn Off the Dark Returns to the Stage 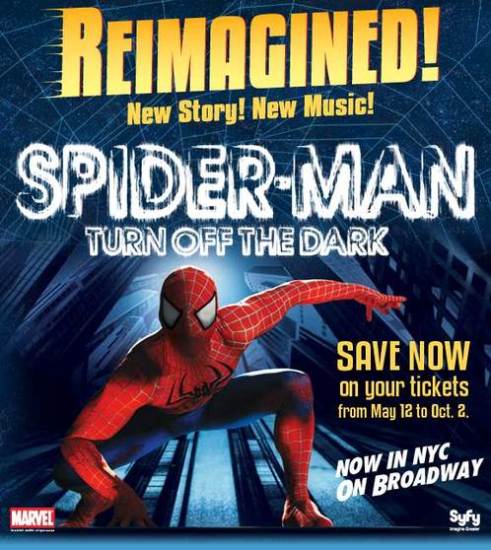 Our long national nightmare has only begun, ladies and gents! May 12 (next Thursday) marks the return of Spider-Man: Turn Off the Dark, the Broadway musical originally conceived by Julie Taymor only to go horribly wrong, several times over again. Well now it has been “reimagined” by a new team — co-producers Michael “Stepped in Dog Poo” Cohl and Jeremiah Harris — and it’s time to turn on the … lights? I don’t know. It’s wrong to have expectations. Let’s just hold our collective breaths and hope no one dies.

Topless Robot has the following from a promotional email that was sent out:

Order your tickets now and be the first to see the brand-new version of Broadway’s musical spectacular–with new music, new scenes and a whole new take on the mind-blowing theatrical adventure. Songwriting superstars Bono & The Edge of U2 have joined forces with a new team of artists to bring this sensation to even greater heights. Be there.

Um, Spider-Man: Turn Off the Dark Public Relations Department? When one of your biggest headlines was how one of your main actors — like the one playing Spider-Man — was hospitalized after falling from a “great height,” how are we all supposed to feel about “even greater heights”? Because I would say: “Worried. Worried and terrified.” And there won’t even be any songs about shoes to distract us whatever carnage may befall us.