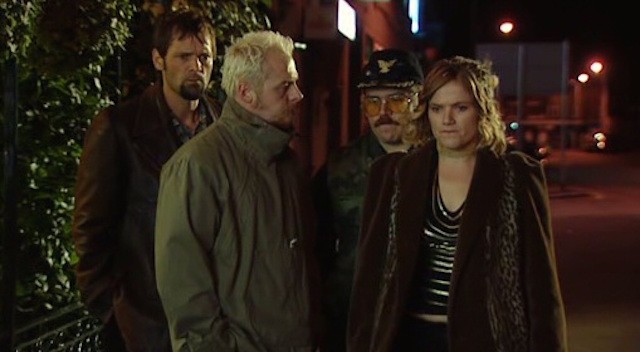 The start of the episode, despite the air of friends having fun at a night out, is interwoven with a sense of doom as Brian sits in his darkroom, developing photographs. The way it’s shot gives it a sense of foreboding, with the way the pictures develop and the way they hang literally drawing lines in between the group.

It’s obvious from the get go that drama is going to ensue. While watching, I can’t say I expected for myself to be as bothered as I was by the events.

It all begins innocuously enough with Daisy celebrating her 26th birthday as events around her start to unravel at the seams. Despite the day beginning with Tim serenading her with a charming version of “Happy Birthday,” nothing else goes well. Twist breaks up with Brian, Marsha catches Sophie and Tim kissing leading her to believe that Tim is cheating on Daisy, and Daisy experiences a birthday dinner from hell.

Count me as someone who doesn’t care all too much that Twist and Brian stopped dating. Sure, they were a fun pair and brought out some of each other’s eccentricities, but Twist was never developed as a character to the extent of the others, and Brian’s relationship with every other character on the show is more interesting that his with Twist.

It does provide some fantastic parallel scenes, with Daisy and Twist and Tim trying to comfort Brian in his own, anti-affectionate way. Twist seems nonplussed by the whole thing, telling Daisy that all Brian ever wanted to do was have sex, while Brian is torn apart, something Tim isn’t equipped to handle.

Sophie is a character I was worried about, if only because I was worried the show would take the easy and familiar path of demonizing the character to make Daisy look all the better. I underestimated the show because Sophie, while obviously not as well integrated as the rest of the cast of characters, is written to be a lovely human being who’s nice to Daisy. What’s more, rather than just making it a “Daisy’s jealous of Sophie being with Tim” narrative, they also have Mike reaction with jealousy, turning it more into an issue of shared time.

Daisy keeps getting told to doll up for the night out, either by Twist telling her it’s okay to care how she looks, and Marsha giving her lipstick (which of course later opens with a lightsaber sound effect). Daisy ends up getting dressed up, more than she typically would and I will admit to being genuinely annoyed that no one took notice of how much of a knock out Daisy looked. Sure, she always looks great and I, like her, likes the way she dresses, but she deserved that pick me up. Is it worth noting, by the way, just how much the wardrobes these characters wear help define their personalities? From Mike’s military get up, Tim’s beanies and wallet chains, Daisy’s floral button downs and Twist’s bright colored hair ties, these characters are distinctive way beyond how they’re written.

Marsha is stressed out over the idea that Tim has brought who she believes to be his secret girlfriend to the dinner, having no clue that Tim and Daisy aren’t actually together. I’ve always enjoyed just how much Marsha seems to actually care about Daisy, more than any of the others and even if it’s misguided, her protection of her here is sweet, even it leads to Marsha’s own distress.

Daisy is forced to tell Marsha the truth, even if she is a little drunk and it might not be a great idea, and Marsha doesn’t react well, sticking to the notion that they’ve all be lying to her. She’s insecure that it’s been all of her “new, young friends” having a laugh over her not knowing the entire time. Daisy and Tim try to explain that they only did it because the ad in the paper had said it needed to be a couple who moved in, only to learn that it was a mistake made by a fantastically weird cameo from Ricky Gervais.

Marsha storms off and the table—sans Sophie, who’s left—devolves into an argument about who’s wronged who.

Did the ending upset anyone else like it upset me? It’s stressful seeing this group of friends fight so viciously, using cutting remarks to get the upper hand. It’s an ugly look for any person, real or fictional, and it’s something that people have a habit of resorting to whilst in the middle of a heated arguement. It’s human which makes it relatable, but it also doesn’t make it less awful of a device to cut down friends. Luckily the scene is peppered with humor such as Marsha rushing back to grab her wine, or at the end of the cake battle, having Tim and Mike rather the police be called than be forced to pick up the mess they made. The cake battle itself is comedic, even if it’s never played for laughs, but rather the absurdity of it elevates it on it’s own.

We like these characters, we’ve grown attached to these characters and despite some more subtle moments here and there and petty arguments, this fight seems personal, and, potentially, lasting. It’s an episode with incredibly high stakes for a series defined as a sitcom, and an oftentimes absurdist one, but it’s what can happen when a show has such well defined characters—ones that feel like we could meet them on the street (I’d still love to be best friends with a Daisy).

The episode ends with an Empire Strikes Back homage—complete with score, which surprised me—and there’s a melancholy to it. The laws of television tell me that all we be resolved, but in the last moments it’s hard not to be a little concerned.

Another great half hour of television and, because I failed to mention it above, this is yet another strong feature for Jessica Hynes. Why is it that the only thing I’ve seen her in since this series has been one episode of Doctor Who?