Southern Cross #9 Gives Us What We Need: A Badass Old Lady With a Gun and a Mission 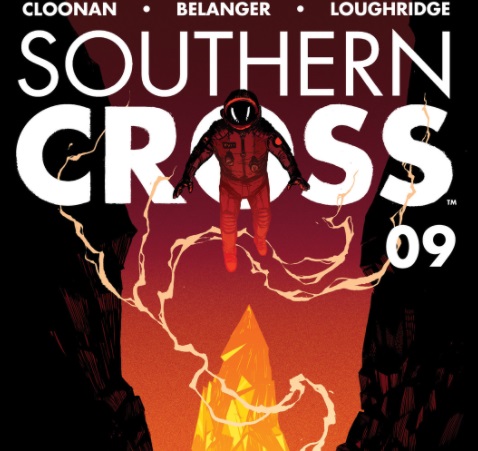 When you think about old ladies, what sort of role do they play in the stories that come to mind? I have no doubt that we can all think of formidable older women in our personal lives, but for women in pop culture, sometimes it feels as though we are no longer allowed to be the protagonists in exciting stories past the discovery of our first gray hairs and wrinkles. We’re making progress when it comes to representing diversity in some things, but where are my old ladies being awesome in comics?

Well, you can find one elderly woman heading up the second season of Southern Cross. Her name is Hazel Conroy, and she has a blaster and an Artemesia Gentileschi painting of Judith beheading Holofernes so, like, sit down, drink your tea, and do what you’re told, son.

Southern Cross began as a sci-fi noir with a dash of gothic horror. It’s been compared to Murder on the Orient Express, Alien, and Event Horizon. The first arc focused on Alex Braith, a loner ex-con taking the Southern Cross space freighter to an off-world mining operation to collect her sister’s remains after a mysterious accident. Alex also intends to hunt down some answers about what happened, but then her roommate disappears under decidedly bizarre circumstances. Alex soon finds herself drawn into some disturbing otherworldly phenomena we eventually learn is related to a powerful and valuable alien artifact dug up in the Titan mines.

Writer Becky Cloonan casts these events in shades of subtle gaslighting that, combined with the thoughtfully claustrophobic ship interiors by Andy Belanger and Lee Loughridge, keeps the reader as disoriented as Alex, but also as deeply engaged in learning the truth. The creative team gives just enough to keep readers from feeling legitimately frustrated, while coaxing us along with tantalizing mysteries just out of reach—not the least of which being, where did the Southern Cross go? At the end of the first arc, the ship vanishes.

Southern Cross #9 is the middle of the second arc, where the story has shifted to the mining outpost on Titan in the wake of the Southern Cross’s disappearance. Belanger and Loughridge adapt their style easily, infusing the corridors of the rowdy mining rig with manic danger and the landscape of Titan, desolate and foreboding. In the midst of a miner uprising, Hazel is trying to figure out what these alien artifacts are and why so many people associated with them are turning up dead, and she’s not about to take any nonsense from a bunch of recalcitrant miners—nor from Kyril, the lone escapee from the Southern Cross. And she definitely does not have time for the sadistic guards on the rig.

With its new protagonist, the tenor of Southern Cross reorients away from the quiet, creeping dread of a horror noir to a full-fledged action/adventure sci-fi story, complete with futuristic weapons and good, old-fashioned bloody beatings. It’s unclear where Hazel’s loyalty lies in all of this. She’s obviously in a position of relative power on Titan, but she doesn’t seem the type to toe the line for a corrupt corporation or an organized crime ring, so why exactly is she taking up this cause? It could just be the savior complex of a former cop, but Cloonan embeds clues in the issue that suggest there’s more to Hazel’s past than just detective work. Whatever her reasons, it’s exhilarating to see an older woman treated like a complex action hero.

Tia Vasiliou, aka “Lou,” is a digital editor at comiXology, co-host of The ComiXologist podcast, and sadly not an action hero. Yet.