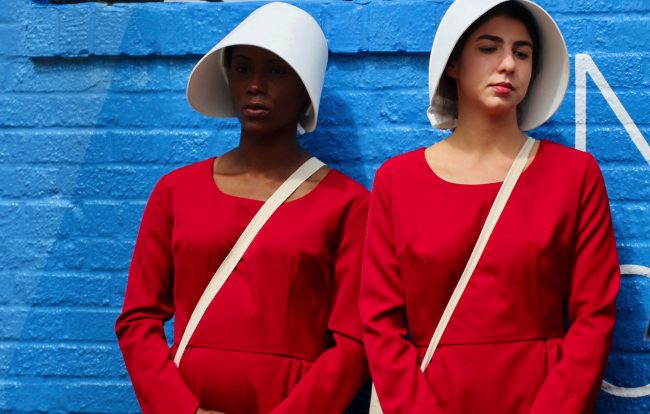 This week, an Idaho state senator who agreed to meet with college students in his state about sexual health education instead chose to yell at and berate the students with an anti-abortion rant. The University of Idaho students had notably traveled 300 miles to meet with state Sen. Dan Foreman, a Republican, and recorded him yelling at them that “abortion is murder” after identifying himself as a “Roman Catholic and conservative Republican.”

You can see for yourself in the video below:

Another state senator allegedly “waved a rosary at them while discussing the benefits of abstinence,” according to The Cut.

The episode is drawing wide attention on social media for its almost comical levels of terribleness, and it seems worth taking a step back and really asking ourselves when and how this became normal: the personal religious views of some overhauling politics and the dialogue around women’s health and bodily autonomy. That’s completely backwards, and when Election Day comes this year, we have the opportunity to change this.

On Tuesday, a South Carolina state Senate panel voted 12-9 to pass the Personhood Act, a bill that would effectively ban abortion, birth control, and fertility treatment, to the Senate for a vote. The bill, which makes no exceptions for victims of rape and is being marketed as a direct challenge to Roe v. Wade, is one of the most extreme bills floated in recent history, as it goes further than banning abortion and even makes fertility treatment and forms of birth control inaccessible and criminal. The bill bans fertility clinics from discarding unfertilized eggs, a restriction that could wind up shutting down many clinics.

State Sen. Richard J. Cash, a Republican and the bill’s most vocal advocate, said he had chosen not to include language to protect birth control in the bill, which contains language about personhood that could easily be used to deny legal distribution of birth control. Cash said that “birth control pills, the way that they are formulated, have and could change over time”—a bizarre, inaccurate statement that laid bare his ignorance about the complex issue of reproductive rights. And yet, despite this ignorance about women’s bodies, he’s nonetheless taken it upon himself to legislate them.

Of course, while extreme, the Personhood Act isn’t exactly surprising, especially considering the prayer circle Cash led among his fellow Republicans on the committee prior to the vote. “We are trying to challenge the Supreme Court on their fundamental error that a human being is not a person,” he told The State.

But what was particularly interesting about the bill that, at this point, has started to feel annoyingly redundant was Cash’s debate with Sen. Mia McLeod, a Democrat.

Speaking about his refusal to include an exception for rape victims to the bill, Cash said, “You cannot erase the rape by killing the child. The child is an innocent person.” To which McLeod responded by asking him, “Have you ever been raped? Have you ever been pregnant?” Predictably enough, Cash was not able to respond to either question.

The dialogue added some necessary perspective to just how ridiculous it is that men who will never directly experience the consequences of their policy ideas are too often the ones unilaterally making decisions. And those decisions are, more often than not, objectively terrible, dangerous, and degrading. So, in other words, here is your daily reminder to vote.

On Tuesday, the Wisconsin state Senate passed a bill that would ban insurance coverage of abortion for public workers. The bill now proceeds to Republican Gov. Scott Walker, whose starkly anti-choice record includes signing off on a dangerous 20-week ban and working to defund Planned Parenthood. How he’ll handle this latest abortion restriction is hardly a mystery.

Assembly Bill 128 would make the government-provided health insurance that thousands in the state rely on no longer cover abortion services, except in cases of rape, incest, or to preserve the mother’s life. AB 128 may be marketed as just another restriction on insurance coverage, and yet in reality, it’s so much more. Without insurance coverage, abortions can cost up to $1,000; in essence, this bill is a ban on abortion for low-income government workers, costing them their bodily autonomy and dignity so a few lawmakers can feel morally superior.

Most women can’t afford the birth control they would prefer, study says

According to a new study published this week in the American Journal of Public Health, most women prefer long-lasting birth control, and would use it if not for the high cost.

Without the additional insertion and physician fees, IUDs already can cost around just under $1,000 without adequate insurance coverage. When offered either IUDs or birth control pills free of cost, the majority of the 4,400 women sampled in the study chose IUDs.

IUDs are more effective in preventing unintended pregnancy, and one large factor in this is that many women on birth control often lead busy, chaotic lives, so that remembering to take the pill every day and making time to restock on the pill can be difficult. Many women clearly would feel safer using long-term, more reliable contraception, and it all goes back to the far too often economic inaccessibility of crucial reproductive decisions.