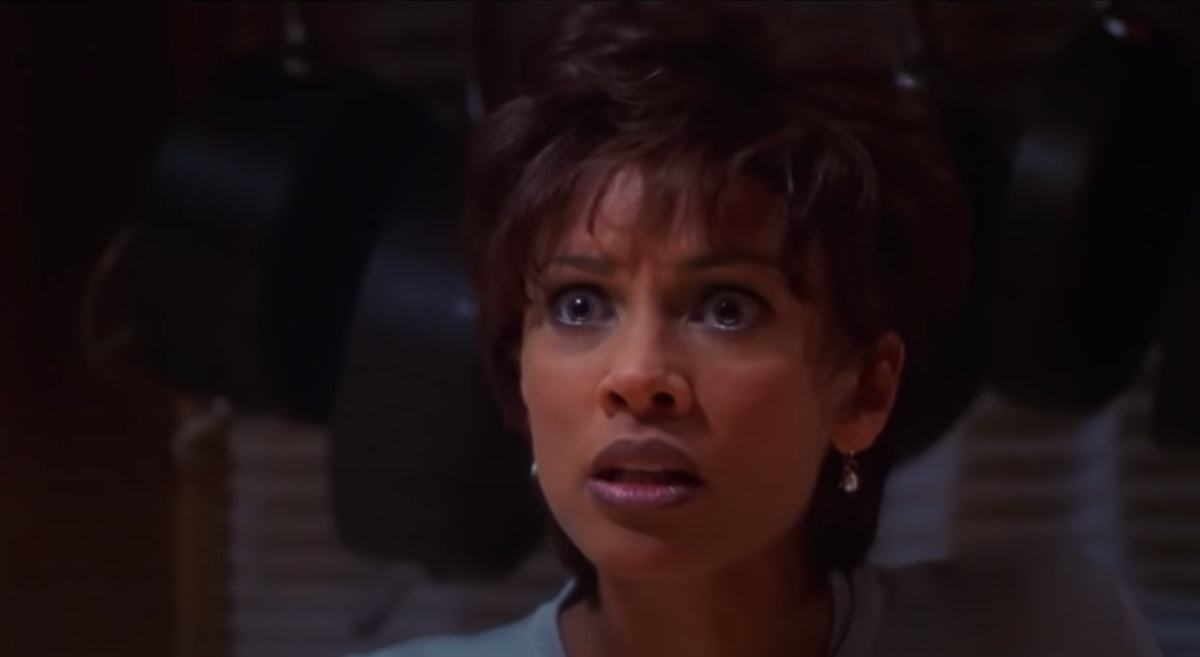 As per Black Twitter tradition around the holidays, a clip was shared last week from the 1997 film Soul Food, and if you’re familiar with the movie you know exactly what clip I’m referring to.

This was truly a moment.

In case you need context for Vanessa Williams doing the damn thing, her character (Teri) is pissed off because, as she says, “I let the family in my house, and you know what? The family fucked my husband.”

Teri reveals that her cousin, Faith (Gina Ravera), slept with her husband, Miles (Michael Beach). There’s a lot more to it than that, and trust me, I’ll get to it, but that’s the tweet limit version of events that culminate in her grabbing a knife.

To this day, Teri’s bold declaration of “fuck the family” is one that hits every time I see it, but back when I initially saw the movie I was still pretty young (14) so I didn’t quite realize that the statement wasn’t just about what Miles and Faith had done.

There’s a strong message of family getting through anything in Soul Food, but as I’ve gotten older I’ve learned the importance of having boundaries in place—especially with family. I’ve also learned that I don’t have to force myself into uncomfortable situations because family, nor do I have to excuse bad behavior because family. I’ve learned that when someone wrongs you, forgiveness has to be earned, not assumed, and by doing this I realized just how much Teri’s family had hurt her—and hadn’t really done much to make up for it.

Watching this as an adult I realize how much Terri was used and mistreated. They talked down on her about being “uppity”, but she is funding weddings, buying salons & paying all her mother’s bills while y’all KEEP sleeping with her love interests. Abuse.

Girl, I will fight people about Terri Joseph. That family did not deserve her. (Also, can we please give more love to Vanessa Williams? That woman is incredible).

This scene always cracks me up.🤣🤣 Maxine and Kenny are pearl-clutching at Miles knowing Teri discovered years earlier they were secretly fucking each other while Kenny was her boyfriend years before they eventually married.😭💀😆 pic.twitter.com/r5U3bo1ONb

That’s the part that sticks with me now. It’s not just the wrongs done to Teri, but the fact that they aren’t really ever addressed. No real apologies are made, no one’s really held accountable because family “can get through anything,” and she’s depicted as a bitter woman who is, somehow, at fault for all of the pain she’s dealing with.

Fairly early in the movie, for example, we’re told that Teri and Maxine (Vivica Fox) don’t get along as sisters because, well, they just don’t. However, we find out (after Maxine initiated the argument during dinner) that the reason they don’t get along is that Teri caught Maxine in the car with her boyfriend, Kenny (Jeffrey D. Sams), who Maxine would go on to marry.

Now I’m sure these two have had disagreements over the years, that just goes with the sibling contract, but this isn’t just a moment of vinegar and oil not mixing (as we’re initially told), this is someone being seriously hurt by her boyfriend and her sister. I mean… catching your sister in the car with your boyfriend is A LOT, however, it’s told in this “cute family memory” sort of way where we’re supposed to think that Teri should let it go.

This isn’t endearing at all! How is this getting such tender narration?! I know this movie is told from the eyes of a child, but how are none of the adults in the story realizing how messed up this is?

Even worse? After Teri catches Miles and Faith together, she actually has a moment where she blames herself, feeling that she pushed her husband toward someone else the way she thinks she did Kenny all those years ago. She wonders what would’ve happened if she and Kenny got married, only to conclude that she’d “find a way to screw it up.”

This isn’t your fault!

There’s no moment to explore this, though, as everyone comes in to ask Teri for money, which is what everyone always does with Teri. Since it’s family, though, the assumption is that Teri’s money is their money, after all, it’s not like she’s in need of it, she can afford to pay hospital bills, start-up salons, and whatever else the family needs. Whenever she pushes back against this and points out how she worked hard to get where she is, it’s meant to make her look like such a hardass that it destroyed her marriage, as she wasn’t supportive of Miles’ music career.

Miles who, at one point, takes money out of their savings account without talking to her.

Miles, who would go on to sleep with her cousin, a cousin who no one wanted to let stay with them so they dumped her off on Teri.

Miles who, I assume, knows what happened with her past relationship (where her boyfriend slept with her sister) but went ahead and messed with her cousin anyway. That’s skeezy all by itself, but knowing Teri’s relationship history makes it even worse.

As an adult, I’ve had to set boundaries and have had people assume they had access to me in ways they didn’t bother discussing with me because they were relying on our relationship to do the talking. As an adult, I’ve had people hurt me in indescribable ways, but instead of apologizing and working to do better, they slapped on that family/friend/loved one label in hopes of that being enough.

There was never evidence of them regretting what they did and, instead, an assumption that family absolved them of any form of accountability.

Not to mention the assumptions from folks who don’t know the details of the issue, people feeling the need to put “making amends” on me even if I wasn’t the one who caused the rift between us. There’s this thing people do where they tell us to forgive others who have hurt us, often layered in some sort of “you don’t know how much time you have with them” dialogue to make you feel bad for walking away from toxic loved ones.

But why does it always have to be up to us, I ask? If it’s my fault for standing up for myself, then I guess I’m to blame for my own peace of mind.

When I look at Teri now I can’t help but want to apologize for ever entertaining the thought that she was the reason behind her suffering, but now I know that, sometimes, it really do be family. As Teri says when everything’s laid out in the open, “Can we talk about what? Fuck you!”