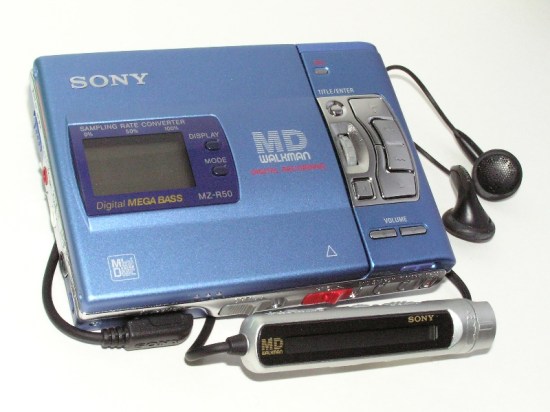 News that SONY will cease production MiniDisc players, nearly 20 years after it’s introduction, was likely the most you’ve heard about MiniDiscs in a long, long time. The announcement will surely not conjure the bittersweet feelings of the final Space Shuttle launch, and is better compared to the rediscovery of a species long thought extinct.

The coelacanth of the portable music world, the MD player was aimed at finally pushing casette tapes out of the market back in 1992. When they were first introduced, the MD touted many advanced features. Thanks to its proprietary compression format, MDs could fit a CD’s worth of information in a fraction of the space and with virtually no skipping. Also, because MDs used random access memory similar to a computer, they sported super-fast seeking between tracks and could be edited on the fly.

But high technology does not necessarily make a successful product (Betamax, anyone? No? How about Laser Disc?). In the end, SONY’s Discman reigned supreme until the MP3 revolution kicked into high gear. Though the MD had some of the features that would become commonplace with portable digital music players like the iPod, it will forever be relegated to the sad heap of failed technologies. In case you’re curious, the last players will ship this September.

(Nikkei via BoingBoing image via Wiki)